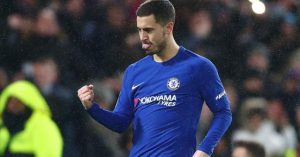 Hazard has made a fantastic start to the 2018-19 season, scoring eight goals in 10 appearances for Chelsea thus far.

The Belgian has long been considered one of the game’s biggest talents, but his inability to hit true scoring heights – his best season with Chelseas saw him score 16 Premier League goals – has kept him from being seriously considered for the game’s top individual prize.

The former Lille wideman even suggested that he could be forced to leave Stamford Bridge for Real Madrid if he is to challenge for individual silverware in the future.

But current Ukraine manager Shevchenko feels that continuing the form he has shown in the early weeks of the current campaign could see him recognised sooner rather than later.

“Why do attackers always get individual awards? Because they are responsible for finishing attacks,” Shevchenko told Goal. “People like to see goals scored. Hazard is a phenomenal, fantastic player, but he wasn’t getting those 20-25 goals per season.

“This season he already has eight, so he’s on the road to that number. He has every chance of winning the Ballon d’Or.”

Hazard’s performances have helped Maurizio Sarri to get off to a flying start to life in west London, with the Blues unbeaten under the former Napoli boss.

Chelsea are level on points with Manchester City and Liverpool atop the Premier League table, and Shevchenko – who has visited Sarri at the club’s Cobham training ground already this season – has been impressed with the work the Italian has done with the Blues.

“Chelsea have a very good team, an excellent range of players,” the 42-year-old, who has worked as a pundit for DAZN this season, said. “The structure of play encouraged by Sarri suits the players at Chelsea very well. They like to play creative football.

“The team has started well, showing both high-quality football and good results.”

One Blues player who has not had as strong of a start as Hazard is Alvaro Morata, who has just three goals in 10 appearances and has seen his playing time diminished by the arrival of Olivier Giroud back in January.

Shevchenko knows exactly what it is like to struggle for goals at Stamford Bridge having failed to live up to his £30 million price tag when he left AC Milan for the English capital, eventually scoring 22 goals in 77 appearances for the Blues.

But he believes that Spain international Morata is on the verge of turning things around having found the net in each of his last two appearances ahead of the international break.

“The main thing is that Morata has chances. He just needs to become more clinical in front of goal. If he does that, he will start to score a lot, very soon.