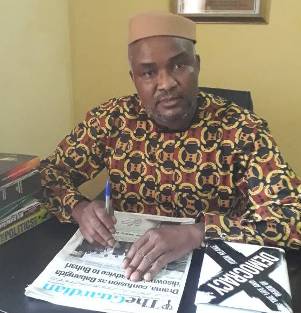 Great Britain and the United States of America are strong constitutional democracies today for a number of fundamental reasons.

Significantly, the above mentioned nations are respected constitutional democracies because of the strength of their democratic institutions and the enforcement of the rule of law and checks and balances amongst the administrators.

Institutions are strong and political actors are subservient to the laws of the land.

A sign that the democratic institutions are strong and functional is shown by the respect the individual administrators pay to the legal roles which those institutions are empowered to play. Disrespect to the laws have constitutional implications.

The other day in Great Britain, the court had to adjudicate and pass a verdict regarding the modalities that could be adopted in parliament to okay the results of the referendum on British exit from the European Union.

The matter was instituted by an individual and it reached the apex court even as the legal position of the British government was floored by that of the litigant who is a private citizen of United Kingdom.

Gina Miller, 51 is an investment manager and philanthropist who was born in Guyana but was educated in Britain.

She took the British Government to court and got three judges to rule that parliament must vote on when this process can begin regarding exit from European Union.

British Broadcasting Corporation quoted her as saying that the case was about scrutinizing the details of Brexit such as a�?how we leave, how they are to negotiate, the directions of travel the government will takea�?.

By the court ruling made by the Supreme Court, analysts believe that leaving European Union is much easier and keeping the United Kingdom much harder.

Theresa May, the British Prime Minister immediately complied with the decision of the court of law.

That tells you how strong the institution of the judicial system is in a country that even operate an unwritten constitution is.

As I put pen to paper, some people in Scotland have just obtained a court’s decision stating that another vote can be conducted to nullify BREXIT.

Mind you, Nigeria got her political independence in 1960 from Britain and all the laws in operation in Nigeria have traditional British historicity.

In the United States, President Donald Trump came to office a year ago and issued a set of new immigration rules and listed some six Islamic nations that the citizens are banned from entering the USA due to fear of terrorism.

This decision was immediately challenged in the District Court which nullified this new immigration regime of Trump.

But the president whilst respecting the ruling fully, also proceeded to the Supreme Court to challenge the lower courta��s decision.

The Supreme Court around December 4th 2017, ruled that the Trump administration is allowed to stop certain groups of people from entering the USA.

The decision of the apex court was an interim order pending the determination of the substantive suit challenging the ban in its entirety.

The United Statea��s presidential system is the version that Nigeria copied our current system of presidentialism.

Article three of the United States constitution is similar to section 6 of the Nigerian constitution.

The American constitution in Article III; section 1 states thus: a�?The judicial power of the United States, shall be vested in one supreme court, and in such inferior courts as the congress may time to time ordain and establish.a�?

On our part, section 6 of the Nigerian constitution states as follows: a�?The judicial powers of the federation shall be vested in the courts to which this section relates, being courts established for the federation.a�?

So far, we have established the historical linkages between Nigeria, Britain and the United States. We have also cited cases in which both the United States and British governments complied totally with the decision of the courts of law.

But in the present day Nigeria, the current federal government has openly professed her refusal to respect binding decisions of Federal High Courts on the bail of the leader of the Islamic movement of Nigeria Sheikh Ibrahim El-Zakzacky.

The Nigerian minister of information Mr. Lai Mohammed who happens to be a lawyer was so disrespectful to the judiciary to an extent that he explained that government will not respect the different orders validly made by different divisions of the Federal High Court asking for freedom for the detained religious leader and his wife. Unfortunately, the official and private bars of the legal practitioners have failed to rise to the occasion and defend the integrity of the judicial system. This is shameful. Nigerians must speak out to defend our constitution if we are not to voluntarily permit the current government to lead us into anarchy and lawlessness.

So why is the Nigerian president refusing to release the leader of the Islamic movement of Nigeria who has been granted unconditional bail?

As far back as December 2016, the Federal High Court in Abuja, ordered the unconditional release of detained Shiitea��s Islamic leader, Sheikh Ibrahim El-Zakzaky and his wife, Malama Zeenatudeen within 45 days.

Delivering the judgment, the Presiding Judge, Justice Gabriel Kolawole held that the continued detention of El-Zakzaky and his wife by state instrumentality was an arbitrary act.

Kolawole said no extant law within the countrya��s statutory legal frameworks and external ones subscribed to by the state had allowed anybody to be held against his or her wishes.

The News Agency of Nigeria (NAN) reports that El-Zakzaky had filed a fundamental right enforcement suit against the Federal Government challenging both him and his spouse detention.

The court therefore, held that the continued detention of the applicant without trial amounted to a gross violation of the constitution and the African Charter on Human and Peoplea��s Rights.

a�?I have studied the addresses of Mr. Femi Falana (SAN), counsel to the applicant and the counter-argument advanced by Mr. Tijani Gazali counsel to the state.

a�?The issues raised in the application were to me fundamental rights issues.

a�?The fact, however, remains that the respondents have not denied they have not kept the applicant and wife in detention since Dec.15,a��a�� he said.

Kolawole further said that the defence of the respondents was not tenable in law, adding that the state had not justified why the applicant and his wife were held under protective custody.

According to him, neither the constitution nor the National Security Act allows a citizen to be in protective custody except on grounds of suspicious contagious disease.

a�?The respondents have not shown evidence to indicate that El-Zakzaky and his wife are plagued with such ailments that required them to be kept away from their community.

a�?It is also clear from the counter affidavit that no such evidence as to complaints of threat on the life of the applicant and his family to warrant their protection.

a�?The court has come to the conclusion that the applicant and his wife have been kept against their desires, thereby resulting in the breach of their rights to liberty.

a�?This court refuse to accept that the applicant and his wife were under protective custody,a��a�� the Judge held.

The court therefore, went ahead to award the sum of N50 million as general damages against the Federal government in favour of the applicant and his wife.

It also ordered the construction of a new accommodation for El-Zakzakya��s family in any part of Kaduna State or any town so approved by the applicant within the Northern region.

Kolawole further ordered the Inspector-General of Police to deploy policemen to protect the shiitea��s leader in his new home pending the diffusion of the acclaimed threat on his life.

a�?I have ordered the immediate release of the applicant and his wife because the family house in Zaria was destroyed between Dec.12 and Dec.14, 2015.

a�?I have given the 45 days as a reprieve for the Inspector-General of Police, Attorney-General of the Federation in conjunction with the DSS to provide the new accommodation before their releases,a��a�� he said.

NAN recalls that Zakzakya��s detention followed a violent clash between his followers and the convoy of the Chief of Army Staff, Lt-Gen. Tukur Buratai in Zaria on Dec. 14, 2015.

Speaking with newsmen after the proceedings, Mr. Festus Okoye, counsel to the Shiitea��s leader, described the outcome of the suit as a victory for civil rule.

He said the development would go a long way to douse the tension the detention of El-Zakzakya��s had generated in members of the Islamic Movement of Nigeria (IMN).

a�?We are, however, waiting for the government to without delay carry out the orders of the court, that way peace and stability would return to our Federation,a��a�� Okoye said.

On his part, Gazali said the judgment would be tested in superior courts, adding that some of the issues raised were not distilled by the trial court.

Jeeval Bhardway a law scholar opined that the legislature, judiciary and executive are pillars of democracy.

The writer also stated that these arms of government are to work in a way so as to keep a check on each other but the constitution is the higher authority.

Then again, we must remind ourselves that constitutionalism will remain a mirage if courts’ verdicts are disrespected by government officials who have subscribed to respect the constitution.

Let us read what a law teacher stated about the place of enforcement of court orders under a constitutional democracy.

Abdul Yusuf K. wrote that: “Enforcement is defined as a�?the act or the process of compelling compliance with a law, mandate, command, decree, or agreement.a�? Therefore, literarily the enforcement of judgment is the act or process by which a Courta��s Judgment, Rulings and Orders and other decisions of Court are been implemented. A Judgment may require payment by one 10 person to another or into Court a sum of money or it may require a person to do or to abstain from doing a particular act or acts.”

“The process of enforcement is broadly referred to as execution. Lord Denning aptly summarized the process when he stated in the case of Re: Overseas Aviation Engineering (GB) Ltd.”

“As mentioned, enforcement is the last stage of the judicial process after the legal right, claim or interest has been determined on the merit in a Judgment or Order by the Court which remains to be enforced.”

He reminded us thus: a�?Every judgment of the court must be obeyed and is effective from the date of its delivery or from such a date stated in the judgment itself. The Judgment is meant to be obeyed without demand and if there is default in obedience, after a period of grace which can be between three to fourteen days as the rules may prescribe, the Judgment Creditor is entitled to commence enforcement proceedings. A judgment of a Court of competent jurisdiction, it must be noted is valid until set aside on appeal and as such must be obeyed. See the case of Okoya v Santili.”

BUHARI is vacationing in a society that respects their laws but has locked up an innocent citizen illegally in total disregard of the Constitution. Is the President above the law?

9 thoughts on “Freeing Elzakzacky Is A Must”