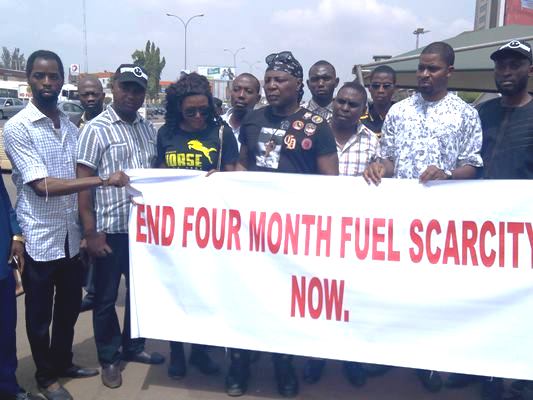 CHARLES Oputa, a.k.a Charlyboy, on Wednesday led the `Ourmumudondoa�� group, on a peaceful protest to the headquarters of the Nigerian National Petroleum Corporation (NNPC) over lingering fuel scarcity across the country.

a�?Ourmumudondoa��is a non-political coalition of Nigerians from all backgrounds that advocates national reawakening towards holding leaders responsible and ensuring good governance at all levels.

The News Agency of Nigeria (NAN) reports that the group said the protest was necessary for the NNPC and other stakeholders in the petroleum sector to know that Nigerians were tired of the fuel predicament.

Charlyboy who spoke on behalf of the group, noted that the lingering fuel scarcity has brought untold hardship on Nigerians, as most stations have remained shut or still with long vehicular queues.

a�?For over three months, Nigerians have endured agonizing fuel scarcity crisis, which has caused a hike in the prices of commodities, cost of transportation and wastage of man-hours spent on queues daily at petrol stations.

a�?The lingering fuel scarcity has now brought untold hardship on the ordinary Nigerian people who may not be able to hold those in charge responsible.

a�?We at the OurMumuDonDo Movement have decided to ensure that the President, the NNPC and other stakeholders in the oil sector are compelled to find a lasting solution to this current crisis.

a�?Let them do something urgently to abate the sufferings of Nigerians, not just in Abuja alone, but across the country,a�? he said.

NAN reports that leaders of some other Civil Society Groups also joined the Ourmumudondo peaceful protest to the NNPC headquarters.

Mr Ariyo Dare-Atoye of the Coalition in Defence of Nigerian Democracy, said Nigerians across different states were buying fuel at exorbitant prices, far above the official pump price of N145 per litre.

a�?It is unacceptable that government and its agents would to `normalisea�� the scarcity, while Nigerians are buying fuel at cut-throat prices in different states.

a�?It is the duty of leaders to take responsibility and serve the interest of the people, no matter what it takes, and that is what we are demanding from the NNPC and leaders at all levels,a�? he said.

Also, Mr Deji Adeyanju of the Concerned Nigerians urged the NNPC to apply inclusive approach in addressing the fuel challenge.

a�?The Federal Republic of Nigeria is not limited to Abuja, as millions of citizens are still struggling to get fuel at exorbitant prices in different parts of the country.

a�?If the situation appeared insurmountable, then the NNPC should convene stakeholders meeting for ideas on how to collectively stop this lingering challenge facing Nigerians, a�?he said.

The group therefore handed a letter containing t its grievances and demands, addressed to the Group Managing Director of the NNPC, Mr Maikanti Baru.

Mr Ndu Ughamadu, Head of Group Public Affairs Division of the Corporation, who received the letter on behalf of the GMD, commended the group for its genuine concern towards the welfare of Nigerians.

He therefore assured the group that their demands would be looked into accordingly, and added that the Corporation was doing everything possible within its reach to ensure that fuel was always available for Nigerians.

He however attributed the lingering shortages of fuel to a�?leakagesa��, adding that many marketers were diverting fuel meant for local consumption to other neighbouring countries.

a�?The NNPC has remained the sole importer of fuel, as well as local refining, and it has effectively done this to meet the daily demand of the products.

a�?However, the activities of smugglers who divert the product meant for one place to another, and even take them to neighbouring countries, has been a major challenge, a�?he noted. (NAN)

Politicians Importing Arms Into Nigeria Ahead Of 2019, Says Ekweremadu