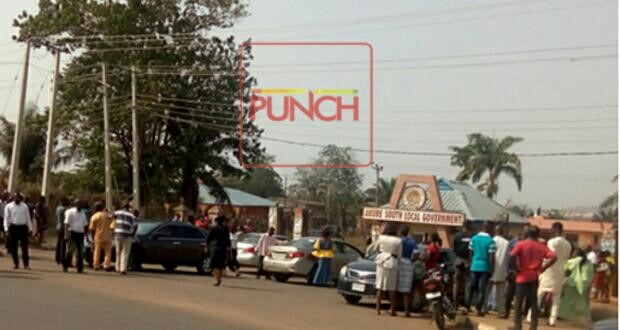 There was pandemonium in the Akure South Local Government Area of Ondo State on Tuesday as some herdsmen chased workers of the council out of their offices.

It was gathered that the attack by Fulani herdsmen followed a disagreement with some of the council workers over a vegetable garden at the back of the secretariat.

A source said the herdsmen, who reside a few metres away from the secretariat, took their cattle for grazing in the garden.

Some of the workers told our correspondent that fight ensued between an agriculture officer of the council, identified as Mr. Johnson Simon, and one of the herdsmen, whose cattle allegedly destroyed part of the vegetable garden.

Simeon was allegedly injured with a machete by the herdsmen, while one of the herdsmen was also injured during the fight.

It was learnt that shortly after the fight, the herdsmen mobilised their colleagues and attacked the secretariat, armed with machetes and other weapons.

It took the intervention of the state Commissioner of Police, Mr. Gbenga Adeyanju, and the Commandant of the Nigeria Security and Civil Defence Corps, Mr. Pedro Ideba, who deployed their men in the council, to bring the situation under control.

One of the injured workers, Mr. Ojomu Olaleye, said, a�?The cows were eating and destroying the vegetables we planted on the field. As Mr. Simon tried to stop them, one of the herdsmen brought out a cutlass and attacked Simon. He (Simon) brought out his own cutlass and they started fighting.

a�?As I was taking the photographs of how the cows were eating the vegetables, I saw many of the herdsmen coming. They rushed at me with their machetes; I ran to the council premises and they chased me. I fell several times and got injured.a�?

Another worker, who declined identification, said, a�?The herdsmen entered onto our premises and started chasing everybody out; they were armed with cutlasses and really wanted to kill.a�?

Simon, who was allegedly injured by the herdsmen, was reportedly rushed to a hospital.

CP Adeyanju, who visited the scene, said that the incident was as a result of a disagreement between some workers and the herdsmen.

He said, a�?The matter will be settled; it was not a serious matter and we are on the ground to ensure that normalcy returns; that is what we are doing.a�?

The Caretaker Chairman of the LGA, Margaret Atere, said, a�?What happened here today (Tuesday) has been happening in other areas. The animals ate the vegetables on the farm and that was what caused the problem. The council prevented it from becoming a full-blown crisis. We have started making peace moves.a�? a�� Punch.