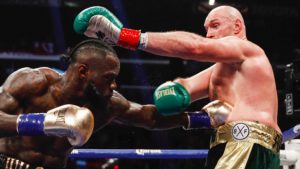 Anthony Joshua would have lost to Deontay Wilder in Los Angeles had he taken the shots Tyson Fury did, according to the former heavyweight champion.

WBC strap holder Wilder retained his belt at the Staples Center on Saturday after the bout with Fury was declared a split-decision draw.

Twice the Bronze Bomber sent Fury to the canvas, only for the 30-year-old to get back up and stay in the fight all the way to the final bell

Fury was disappointed not to have been given the win, but felt he performed better than Joshua would have done – the IBF, WBA and WBO champion having failed to agree terms to fight Wilder this year.

“It’s no secret that Joshua did not want this fight,” Fury told his media conference.

“And he didn’t want it for a reason, because Deontay Wilder is the most fearsome puncher in boxing history, in heavyweight division history, and I saw that and I felt it.

“No wonder AJ didn’t want no part of that right hand! He can’t move like me, he’d have been nailed!”

And when asked if he thought Joshua could have got up from the punches that knocked him down, Fury was steadfast in his response: “No way, no way, he can’t move so he would never have got out of the way of Wilder.

“Wilder’s got lightning fists and dynamite in his hands, he’s a great fighter, I respect him a lot.”

Talk of a rematch with Wilder has already begun with both parties seemingly keen to get a date in the diary, although Fury’s promoter Frank Warren hopes to host the fight in the United Kingdom.

“At the end of the day that [a rematch] is down to Tyson, but from my perspective I’d love the rematch,” he said.

“I’d like to see it in the UK, fill a football stadium up, fill up Wembley, Arsenal, any of those big stadiums.”

And Manchester United fan Fury had another venue to add to the list, the fighter interrupting Warren to say: “Old Trafford! Come on Frank!”

18 thoughts on “Fury: Why Anthony Joshua does not want Deontay Wilder fight”