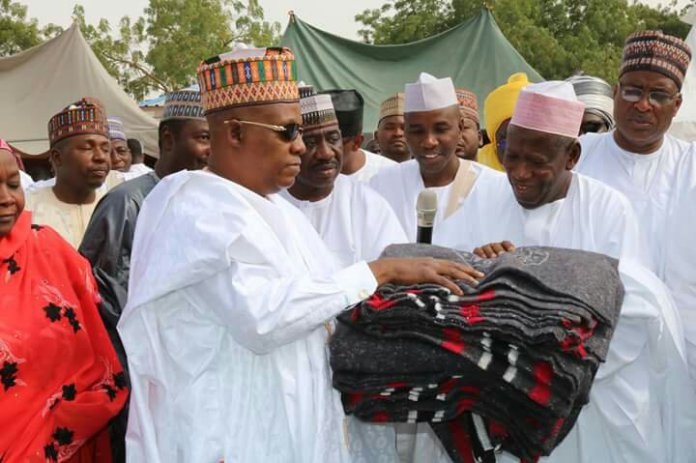 Ganduje announced this Friday when he led a delegation of Kano State Government officials and traditional leaders to present 100,000 blankets and N20 million to the internally displaced persons (IDPs) in Borno State.

Presenting the blankets to Governor, Kashim Shettima of Borno State at the Government House Maiduguri yesterday, the Governor Ganduje said the gesture was part of the kano state governmenta��s policy supporting and reaching out to other states in times of need.

Ganduje also addressed over 36,000 IDPs of the Dalori 1 Camp disclosing to them the offer of scholarship , noting that, the present scholarship offer was the second batch to the earlier awarded to 100 orphans that have been adopted by the Kano State Government about five years ago under the administration of Former Governor Musa Kwankwaso.

a�?This is a modest message from the good people of Kano State to our brothers and sisters in Borno Statea�?, said Mr. Ganduje.

a�?It is also part of our continued commitment as a government, and people of one of the most populous states in the country, to always reach out in times like this. It could be recalled that some years back when this insurgency was at its peak, we came here and took 100 orphans whom we are currently sponsoring in one of the model schools of global standard.

a�?We are taking care of all their needs and ensuring that they acquire both western and Islamic knowledge. We are not only giving them education but we have also adopted them as true indigenes of Kano state. They have become ours and we are going to ensure that we see to their education up to the highest level at the university; and when they are done we will ensure that they get employment in Kano state.

a�?This is part of our commitment to promoting Nigeria as one and united country that is great with good citizens that love one another. We will not derail on this noble path because we firmly believe that this is the only right part that will lead us to greatness”, Governor Abdullahi added

a�?It is on this note that we, the government of Kano state have renewed our commitment and perfected our ground work to come here and adopt another set of 100 orphans that will be taken to Kano to be given another scholarship for life.

a�?These children will be given all the dignity and love they deserve so that they can grow up as good citizens of this country under the care of Kano state government”, Ganduje said.