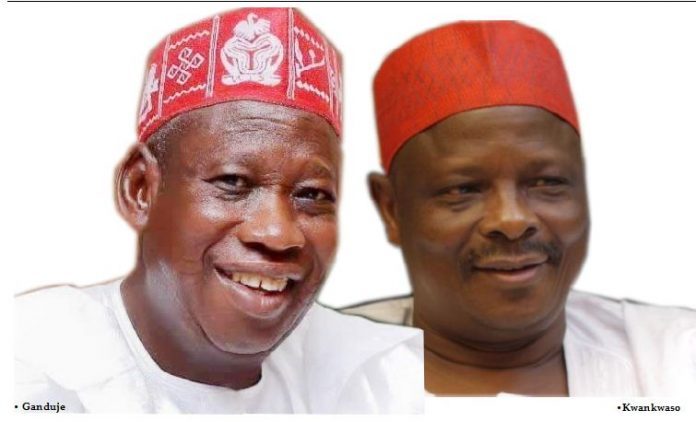 Lagos – There seems to be no end in sight yet on the political crisis between Governor Abdullahi Umar Ganduje of Kano State and his predecessor, Rabiu Musa Kwankwaso.

The recent statement by the government of Kano State condemning remarks against President Muhammaduu Buhari and All Progressives Congress (APC), by Kwankwaso and Kwankwasiyya group is an indication that the strife is still raging.

The State Government’s condemnation was contained in a press statement signed by Malam Muhammad Garba, the state Commissioner of Information, and made available to newsmen in Kano.

The statement was in response to a recent press conference organised by Kwankwasiyya group, held at the Kano chapter of the Nigeria Union of Journalists (NUJ), where the group accused President Muhammadu Buhari of causing crisis in the state chapter of APC.

Members of Kwankwassiya group in the statement were accused of acting a script of Kwankwaso, the former governor with the intention of destabilizing the state chapter of APC.

The statement read, “It is also on record that Kwankwaso and his Kwankwasiyya group, consumed by the tall dream of becoming ‘President’ has unjustifiably maligned President Buhari at every giving opportunity.

“It is on this note that Kano state government seriously frowns at statements credited to the strong member of Kwankwassiyya group, Aminu Abdulsalam who did not only maliciously accused President Buhari of fueling crisis in Kano APC, but also used derogatory words and attacked the personality and hard-earned integrity of Mr. President.

The latest political rivalry between Kwankwaso group and Governor Ganduje started when the National Working Committee (NWC) of APC announced the name of Alhaji Bashir Karaye as the acting chairman of the party in the state instead of Umar Doguwa, a loyalist of Kwankwaso who was suspended by the party some months ago.

The Kwankwassiya group reacted to the decision angrily accusing President Muhammadu Buhari of being responsible for the decision.

A statement by comrade Aminu Abdulsalam, a former commissioner of State Affairs declared, “Some of our loyalists holding position in the party across all the 44 Local Government Areas of the state were removed. It was our thought that gone was the era of impunity and total disregard for rules and regulations, but regrettably to our utmost dismay the thoughts have been proven wrong with this development”.

He said, “ During President Buhari’s last visit to Kano, he held meeting with APC leaders in the state where I believed the removal of the former chairman loyal to Kwankwaso was perfected.” He stated that the action of the governor is an indication that he did not appreciate what Kwankwaso has done for him by supporting him to get to the present position in his political career.

He urged APC to return the former chairman of APC in the state back to his position because he did not do anything that would cause his removal except that he is a loyalist of Kwankwaso. Dansudu described the action of Ganduje as a political betrayal similar to what late Abubakar Rimi, former governor of Kano State did against late Aminu Kano.

“You remember very well that Rimi betrayed Aminu Kano, the leader and founder of Peoples Redemption Party (PRP), but paid dearly for it by losing the second term election to Alhaji Sabo Barkin Zuwo considered to be unpopular and less educated who was the candidate of PRP in 1983”.

He claimed that Kano politics is in the control of Kwankwaso which Ganduje despite his position as the governor cannot take that from him.

“I can tell you that whoever Kwankwaso would present as the governorship candidate in Kano would be the next governor of Kano State I can assure you of that one.” The Kano State born politician expressed disappointment on the way northern politicians are fond of betraying their benefactors and urged northern politicians to learn from their Yoruba counterpart who are always loyal to their political mentors.

The crisis between Governor Ganduje and his predecessor regarded as his political godfather started shortly after the former was sworn in as the governor of the state on May 29, 2015.

Speaking sometimes ago, Governor Ganduje explained why he is at war with his predecessor. “It is on record that the same transition committee that the former governor and I appointed under my deputy governor, Prof. Hafiz Abubakar, uncovered N300 billion liabilities even while Kwankwaso insisted that he did not leave any debt for me.

“But because I felt then that debt, loan or liabilities were normal thing, I didn’t even bother to talk about it, but this really provoked Kwankwaso and he started making frantic moves against my government.”

Ganduje also alleged that some loyalists of the former governor who served as commissioner under his administration were using the local radios to abuse him.

The hope of the two political gladiators sheathing their sword was raised some times last year when the governor and his predecessor met with the Reconciliation Committee set up by the APC leadership at the National Secretariat in Abuja.

Senator Lawal Shuaibu from the state revealed that tremendous progress was made in the reconciliatory efforts and commended Ganduje and Kwankwaso who agreed to put behind their differences and work together in the interest of the people of the state.

Also, early, this year, the Aminu Kano Centre for Democratic Research and Training, Mambayya House, commenced a fresh move to reconcile the two political leaders. As usual, they both met and promised to forget their political differences in the interest of the state.

With the support Governor Ganduje is getting from the national leadership of the party, observers believe the Kwankwasiyya group may consider the option of remaining in the party or not. I addition to the ongoing strife between him and his political godson, Kwankwaso who came second behind President Muhammadu Buhari in the 2014 party primary, may still want to throw his hat into the ring come 2019 and APC may not be the best option as the body language of President Buhari has shown that he would contest for second term.

But when INDEPENDENT seek the view of a member of Kwankwasiyya who did not want his name in print because he doesn’t have the mandate to speak on the matter said Kwankwaso would decide that at the appropriate time.

Disagreement between Tinubu and Ambode is all About sharing of Lagos resources: PDP

42 thoughts on “Ganduje Vs Kwankwaso: As Political Rivalry Continues”