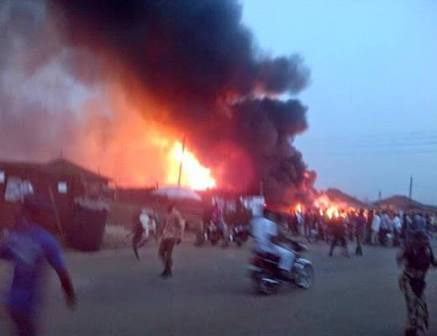 Five persons including four kids and a mother of two have been confirmed dead following gas explosion, which claimed the lives of four of the kids on the spot while some sustained various degrees of injury in Okwe, Oshimili South local government council, Delta State.

It was gathered that trouble started on Thursday night when the unidentified woman whose Provision shop is close to the local gas vendor was trying to prepare food for her children lit her stove, resulting to the explosion which claimed the lives of her children and two other children who came to buy items.

An eye witness said “that woman who has a provision shop at the area close to the roadside where the gas filling shop is also located went to Onitsha market leaving a woman visitor with her two kids in her shop cooking with stove when fire bust immediately into the shop suspected to be through leakage of gas cylinder”.

“At about 4pm on Thursday, we saw her cooking with stove at the front of her shop, before we knew what was happening, a gas cylinder exploded and the provision shop where the woman was cooking with two other shops burnt down.

“When fire gutted the first shop, two kids with their mother were inside the shop, so, their mother quickly ran out of the shop out of fear shouting, without the children, everywhere was tensed and when she realized that her children were inside, she ran inside the shop again to rescued them but unfortunately fire caught her too including two other kids that came to buy items” the eye witness explained.

The two kids were said to have died before the arrival of state fire service to prevent further escalation of fire, “The two kids died at the spot but the mother and other two kids who came to buy something at the provision shop were quickly rushed to Okwe general hospital in a critical condition but were also confirmed dead on Friday morning”, our source further narrated.

Meanwhile, the owner of the gas shop was not around at the time of the incident, but eye witnesses said they suspected that there may have been lickage in the cylinder that caused the fire.