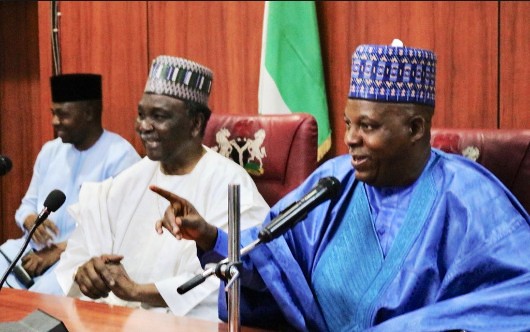 Former Head of State, General Yakubu Gowon has called on Nigerians to continue to pray for peace, unity and progress of the country.

General Gowon made the call Saturday when he paid courtesy call on Governor Kashim Shettima at the government house Maiduguri during his two day visit to Maiduguri city, Borno state on a National Prayer Rally that was organised under the umbrella of Nigeria Prays.

He sad that such prayers were important in promoting unity and harmonious peaceful co-existence among the people as well to soften the socio economic challenges the country is confronted with.

Gowon further urged Nigerians to distance themselves from all violence and acts capable of destabilising the unity, peace and stability of the country.

The former head of state also commended the Federal and State Government for her efforts in restoring peace in the north east and addressing the humanitarian crisis caused by Boko Haram insurgency in the northeast region.

“The governora��s commitment to the restoration of peace is acknowledged by Nigerians. On behalf of Christian community, I commend you and associate with your achievement’s.a��a��

Responding, Governor Kashim Shettima said that the people of borno state have demonstrated high level of religious tolerance and harmonious co-existence despite its diverse cultures and beliefs.

The governor also commended General Yakubu Gowon for his visit, patriotism and selfless service to the nation, promotion of unity, peace and progress of the country.

a�?General Gowon worked for Nigeria without enriching himself and making sure that the word of God remains his watch word in the unification of the country.

a�?We are one people and must remain one; as leaders, we must work to make our people unite for the betterment of all,a��a�� Shettima said.

The governor added that state government has been providing relief materials to the internally displaced persons (IDPs) displaced by the Boko Haram insurgency to cushion their hardships and sufferings.