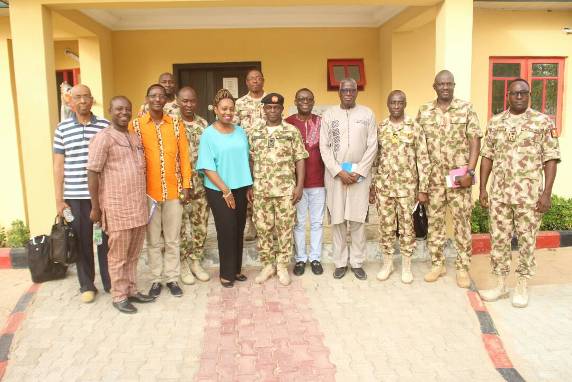 A team of experts from the Lake Chad Basin Commission under the auspices of the African Union (AU) today paid a visit to the Headquarters Theatre Command Operation Lafiya Dole in Maimalari Cantonment, Maiduguri.

The team, which was led by Dr Eleanor Nwadinobi, a Gender Advisor, was constituted by the AU in conjunction with the Multinational Joint Task Force to proffer stabilization and revitalization strategies for the Lake Chad Basin.

Colonel Onyema Nwachukwu, theDeputy Director. Public Relations, Theatre Command , Operation Lafiya Dole in a statement issued Wednesday said Eleanor Nwadinobi stated further that the team was mandated to research and work out strategies in the areas of Humanitarian, Socio-economic, Educational, Governance, Gender as well as Prevention and Countering of Violent Extremism to revitalize and stabilize the Lake Chad Basin.

Eleanor revealed that in carrying out its mandate, it was expedient for the team to visit the Lake Chad Basin Commission member states. She lauded the Theatre Command and troops of Operation Lafiya Dole for the successes so far recorded in the Counter terrorism and Counter insurgency operations against the Boko Haram terrorists.

Responding, the Theatre Commander Operation Lafiya Dole, Major General Rogers Nicholas told the team of experts that the security situation in the north east theatre is generally calm as the Boko Haram insurgents have been degraded.

He however added that the terrorists have resorted to callously carrying out isolated suicide bombing and IED attacks on vulnerable and soft targets.

While fielding questions from members of the team, the Theatre Commander lamented that a wrong narrative about the ongoing war on terror is undermining the operation and misrepresenting it in the public domain.

He stated that the Nigerian state is at war and must be recognized as such to enable the effective mobilization of all instruments of national power to prosecute the war.

Gen Nicholas pointed out, that other stakeholders must play their roles in the multi faceted war against the terrorists for the attainment of total defeat.

He urged the team to be judicious in the execution of its mandate to facilitate the restoration of socio – economic development in the region.