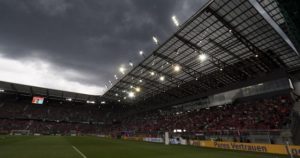 Manuel Neuer played his first match since September as Germany was beaten 2-1 by Austria in its penultimate warmup game for the World Cup on Saturday.

The Bayern Munich goalkeeper, who has recovered from a hairline fracture in his left foot, played the entire match but couldn’t prevent the world champions, who were missing several regulars, from losing for the second straight game after a 1-0 defeat to Brazil in March.

Coach Joachim Loew gave Neuer a chance of proving his fitness for the tournament in Russia, two days before he has to announce his final 23-man squad for the World Cup.

“It was a good comeback after such a long time. He had two, three excellent saves,” Loew said about Neuer, who played his 75th international game but first since Oct. 2016.

“I will talk to Manuel tomorrow. He hasn’t had problems in the match or in training this week,” the coach added.

It was Germany’s first defeat against neighboring Austria in 32 years, and it left the team still winless in 2018 after three games.

Loew rested key players Toni Kroos, Mats Hummels, Jerome Boateng and Thomas Mueller, who all didn’t travel with the team to Austria from its training base in South Tyrol, Italy.

Germany still dominated the first half, and took the lead after 11 minutes when Mesut Ozil picked up a failed clearance by Joerg Siebenhandl and scored with a curling shot past the Austria goalkeeper.

It was Ozil’s first match in more than four weeks as the Arsenal midfielder had recovered from a back injury. He played for 76 minutes before being replaced by Julian Draxler.

Germany nearly doubled its lead in the 20th when Julian Brandt broke through after a quick combination between Joshua Kimmich and debutant Nils Petersen, but the Leverkusen midfielder had his low shot saved by Siebenhandl.

Neuer had his first save in the 14th minute when he dived to catch a diagonal shot by Austria midfielder Alessandro Schoepf. And Neuer was quick to react and deny Florian Grillitsch when the Austria midfielder tried to beat him at the near post in the 31st.

But in the second half, he could not do much about Austria’s equalizer as Martin Hinteregger volleyed in at the back post from a high and curling corner kick by David Alaba in the 53rd.

Neuer saved an effort from close range by Marko Arnautovic just minutes later but wasn’t to blame for Schoepf’s winning goal in the 69th after an excellent team move that split open the German defense.

“This defeat annoys me. We didn’t execute many things we had planned,” Loew said. “We lost the ball too many times where we could have created a scoring opportunity. Today many things were bad. We won’t fool ourselves. We have a lot to work on over the next two weeks.”

It was Austria’s fifth win in five matches under coach Franco Foda, who took over from Marcel Koller in November after the team failed to qualify for the World Cup.

“It’s always great to win, especially against Germany. In the first half we were too passive but in the second half we did much better,” Schoepf said.

The match was delayed for more than 100 minutes after torrential rain and hail had made the pitch unplayable at the scheduled start time.

Angry fans lash out at no free-to-air footy