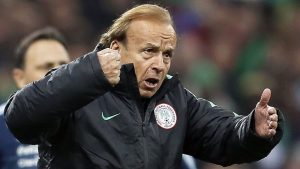 While Nigeria have reason to be quietly optimistic as they come away from the international week, their matches against Poland and Serbia did little to address concerns about the Super Eaglesa�� striking options.

Odion Ighalo looks likely to lead the line at the World Cup, but with just one league goal to his name since October 2017, it remains to be seen whether hea��ll be the lethal presence he might have been in the past.

Against Poland, he was paired with Kelechi Iheanacho but the duo failed to find the desired spark, and he struggled for clear-cut goalscoring opportunities against Serbia.

Ahmed Musa was also given a run out, but despite troubling the Serbian defence with his pace, found no joy in front of goal.

With the aforementioned trio failing to impress, what options does Rohr have as the World Cup approaches?

For all of Ighaloa��s impressive abilities as a footballer, a return of four goals in 17 appearances for the Eagles, with two coming from the spot, arguably doesna��t do justice to his talent.

Al-Ahly striker Junior Ajayi was tipped as a potential option in attack, but visa problems were part of the reason why he was limited to a five-minute cameo during the international break. The 21-year-old, unsurprisingly, had little opportunity to show that he deserved another opportunity.

Beyond Iheanachoa��s struggles against Poland, his terrible domestic campaign also counts against him.

The forward has netted just once in the Premier League for Leicester City after completing a move from Manchester City last summer, and appears to lack the physical prowess or the intelligence of movement to lead the line against top defences.

Despite his eye-catching goals return, Iheanacho is deemed by critics not to have the physical presence and movement to lead the line against formidable opposition.

Turning to Musa in a a�?false ninea�� role again could be a short-term fix, but while his pace is something of a guaranteed threat, the 25-year-old is another whoa��s seen his career stall at Leicester and is in the midst of a miserable campaign.

Elsewhere, Ideye Browna��s experience, physicality and high work-rate make him an outside bet, but hea��s only scored one in seven since joining Malaga in the January transfer window and is hardly in form.

There should also be an option for the coaching crew to observe Anthony Nwakaeme at close quarters one last time before the World Cup.

The Hapoel Bea��er Sheva man recently expressed his desire to earn a recall to the national team after his recent exclusion for the Poland and Serbia games, but ita��s telling that he was overlooked completely by Rohr for the international break.

In Nwakaemea��s defence, he could argue he has had just one opportunity a�� on a bumpy pitch in Constantine a�� to impress, and could return to the fold when the preliminary squad is revealed in mid-May.

Rohra��s decision to opt for Francis Uzoho between the sticks for both of Nigeriaa��s friendly matches appears to confirm that the wonderkid is being backed as the goalkeeping solution for the Super Eagles.

But while one problem may have been resolved, a lack of goalscoring menace up front represents another lingering issue on the horizon. Rohr needs to find a solution if Nigeria are to carry an offensive threat at the Word Cup.

FIFA is taking over African soccer amid corruption charges at CAF