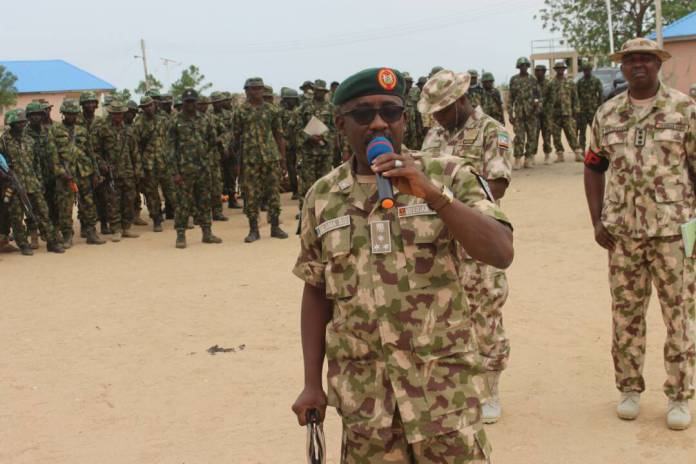 Troops of 7 Division deployed in Operation LAFIYA DOLE, have been charged to remain committed and decisive in the discharge of their duties towards ending insurgency in the North East of Nigeria.

Brigadier General Texas Chukwu, the Director Army Public Relations in a statement Sunday said the GOC added that he was happy to see the troops in high spirit, stressing that his visit was aimed at assessing their training with a view to motivate them in the ongoing fight against insurgency.

He also reminded them of their professional responsibility to defend the territorial integrity of Nigeria as well as security of lives and property.

General Bulama urged them to be courageous, focused and work hard in synergy towards ending the problem of insurgency confronting the nation.

In his words, “we must work hard with each other to achieve common goal. We are few among many that must do the job. We are the Nigerian military, we did not join this profession by accident, what is happening to Nigeria is Nigerian problem and as good Nigerian citizens in uniform, it is our collective responsibility to discharge our duties by defending our nation”.

He further emphasised on the sacrifices of our past heroes who fought the civil war and their departed colleagues that have so far paid the supreme price for the attainment of peace and unity of the country while urging the troops to be motivated, prayerful, develop more aggressive posture and be decisive in all assigned tasks.

He further stressed that, the efforts of the Chief of Army Staff (COAS) Lieutenant General Tukur Yusufu Buratai in providing logistics and other welfare should serve as a moral booster.

The Acting GOC was accompanied during the visit by Commanders and some Principal Staff Officers of 7 Division.

9 thoughts on “Goc 7 Div, Charges Troops To Be, Committed, Decisive”