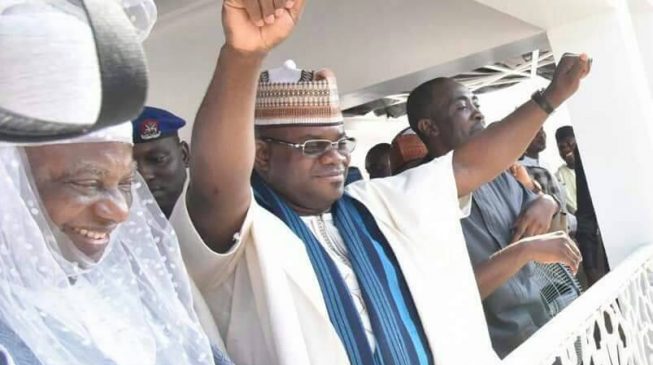 According to an eyewitness account, the Governor was coming from Abuja in a convoy on Thursday when he reportedly fell off the vehicle along old market, Lokoja.

The witness said that Bello, in his characteristic way of spraying money on the road, reached the market side and brought out bundles of naira notes to spray to the people, when he missed his step while alighting from his new BMW car, falling off the vehicle without the driver knowing.

It was learnt that the persistent shouts of passers-by drew the attention of his driver, who immediately applied the brake, but it was too late as Bello was said to have been thoroughly wounded before help could reach him.

He was said to have sustained serious injuries on his legs, and arms and had to be rushed to a private hospital in Abuja where he is now receiving treatment.

Meanwhile, the Director General Media and Publicity to the Governor, Mr. Kingsley Fanwo, in a press statement issued on Tuesday, confirmed the incident.

Fanwo said Governor Bello only sustained injuries to his left foot while alighting from a vehicle, and was not incapacitated as rumoured.

The statement reads: a�?We wish to refute rumours that the Governor of Kogi State, His Excellency, Alhaji Yahaya Bello, is either hospitalised or otherwise incapacitated.

a�?The Governor missed his footing while alighting from a vehicle and injured his left foot.

a�?He was treated by his doctors, who bandaged the leg and discharged him,a�? the spokesman said.

GOV. ROCHAS AND THE PROBLEM OF ACCOUNTABILITY

Nupeng Sympathizes With Families Of Victims Of Tanker Explosion, Commends Frsc, Police, Others