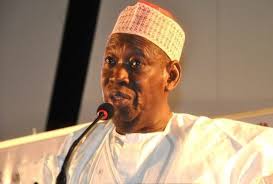 The Supreme Court has affirmed the election of Abdullahi Ganduje as the Governor of Kano state.

Candidate of the Peoples Democratic Party (PDP), Abba Kabir Yusuf, filed an appeal at the apex court to dispute the March 24 supplementary election held in some electoral wards in Kano State.

In a unanimous judgment delivered by Justice Sylvester Ngwuta, the apex court dismissed the appeal filed by Abba Yusuf challenging the election of Governor Ganduje for lacking in merit.

The Independent National Electoral Commission (INEC) had declared the March 9 election in Kano State inconclusive, which led to the supplementary election held on March 23.

We are interested in improving your welfare, equipment and encourage you to end the war…. Defense Minister tells Troops

8 thoughts on “Gov Ganduje Wins At The Supreme Court”