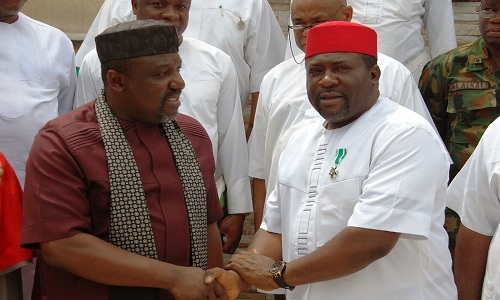 Governor of Imo State Owelle Rochas Okorocha, has distanced himself from an alleged plot to impeach his deputy, Prince Eze Madumere.

The reports of such clandestine moves sprung up in the media after the governor had given indication that he would back his son-in-law Uche Nwosu to succeed him in the Imo government house, despite earlier promises to prop up his deputy for the same position.

Madumere is said to be interested in running for the position after serving his principal with humility and commitment for more than seven years now.

A report this morning by Daily Trust quoted Okorocha as saying that impeaching Madumere at this time a�?would not be of any political advantage to hima�?.

a�?He described the rumours of a plan to remove Madumere from office as the work of mischief makers,a�? the report said, quoting a statement signed by Okorocha’s Chief Press Secretary, Sam Onwuemeodo.

Onwuemeodoa��s statement, according to the report, equally dismissed as unnecessary, calls to dismantle the Owerri statue of former South African president Jacob Zuma, following is forced resignation on Thursday.

Our correspondent however learnt that the sinister moves are anchored by the wife of the governor who is said to hellbent on foisting his son-inlaw on the people of the state.