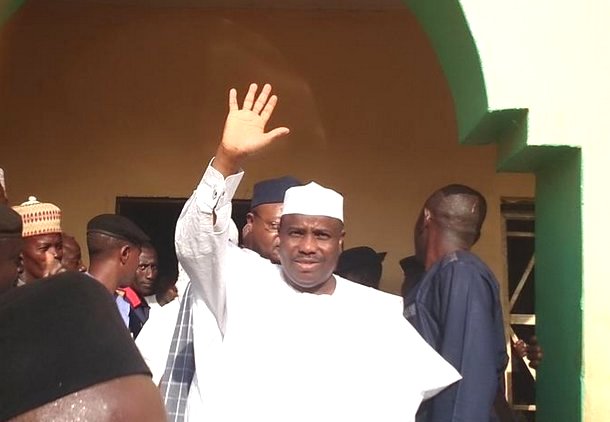 Candidate of the Peoples Democratic Party, PDP, in Sokoto State, Governor Aminu Tambuwal, has been declared winner of the governorship election in the state.

Tambuwal won with a slim margin, after collation of results from 22 Local Governments Areas (LGAs), where supplementary election took place on Saturday.

Fatima Mukhtar, Returning Officer for the election, announced this at the INEC collation center in the state in the state on Sunday.

Governor Tambuwal polled 512,002 votes to defeat Ahmad Aliyu of the All Progressives Congress (APC), who came close behind with 511,661, losing to his erstwhile principal with just 341votes.

Tambuwal was leading with 489, 558 votes on March 9 when the governorship election was declared inconclusive, while Ahmad Aliyu of the All Progressives Congress, APC came behind with 486,145 votes.

For Kebbe LGA, the last deciding factor for the elections, PDP secured 5,457, while APC polled 7,173 votes.

Official results of 21 LGAs announced so far at the State collation centre, located at the Sultan Maccido Institutes, indicates that Tambuwal was leading his counterpart, Aliyu Ahmad of the APC, with a margin of 161 votes.

As such, PDP defeated APC with 341 votes.

For Madumere, The Stake Rises By The Day