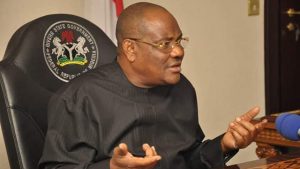 The Rivers State Governor, Nyesom Ezenwo Wike has declared that the “negative role” played by the Nigerian Army during the 2019 general elections is the worst in the history of the country.

He spoke on Friday when he granted audience to the Nigerian Army Committee on Electoral Violence during the 2019 elections at the Government House, Port Harcourt.

The Governor said: “Throughout my experience politically, I have never seen the Nigerian Army play the kind of role they played during the last General Elections.

“If you go to the 6 Division, unless they have moved them out, you will see ballot boxes and electoral materials. The 6 Division served as the take off base for the Electoral Interference.

“We formally request that appropriate sanctions be meted out to the GOC of the 6 Division. It has never happened that the Army Division becomes the operational base of a political party.

“This GOC became actively involved in politics. He has his own Government in Rivers State. He has no respect for civil authority.

“We seek the immediate redeployment of the GOC, Major General Jamil Sarhem. He cannot fight crime. Leaving the GOC here, will be creating more crisis.

“He is here to fight crime and not to play politics. If soldiers fight crime, the way they intervened in last elections, there will be no kidnapper anywhere.

“Elections took place in Rivers State at the polling units. The only LGA where elections did not hold was in Abua/Odual.

“It was during the Collation that operatives of the Nigerian Army interfered. They will invade a Collation Centre, arrest the Electoral Officer, Returning Officer and mercilessly beat up the PDP agents.

“They carted away Form EC 8c for the Governorship election and Form EC 8b for the House of Assembly elections.”

Wike took time to enumerate the areas where the Nigerian Army unleashed violence and deaths on the Rivers people, as he listed the names of Army personnel who led the operations.

He regretted that the Nigerian Army has been relegated beyond comprehension as the GOC allegedly took orders from the Minister of Transportation on the deployment of soldiers to opposition leaders in the state.

The Governor stated that the situation became so bad that the Minister of Transportation, Rotimi Amaechi, had “more than a platoon of soldiers” attached to him each time he visited Rivers State to carry out his “anti-democratic activities”.

He stated that soldiers indiscriminately arrested and detained over 200 PDP leaders agents and supporters at Bori Camp before, during and after the 2019 Governorship and State Assembly elections. (NAN)