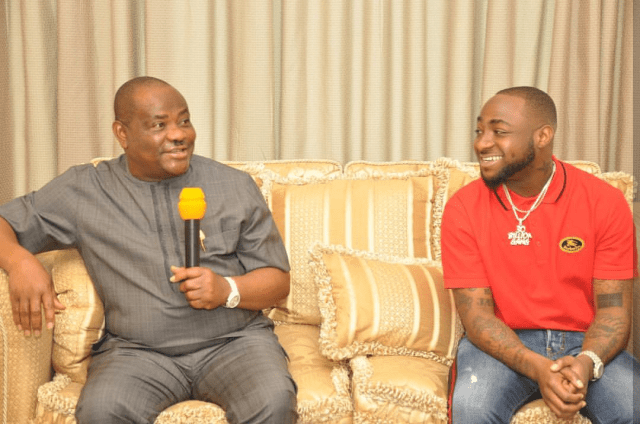 The pop star, who is currently in Rivers State to shoot a music video with Duncan Mighty, met with the state Governor shortly after the shoot.

During his visit to the governor at the Government House in Port Harcourt, the state’s capital, Davido announced his decision to invest in the state’s entertainment sector.

Davido said he has identified young musicians that will be promoted on his wings in the state.

The singer also stated that he will be organising a major music concert in Port Harcourt come December 2018.

While details of the concert and how he intends to impact on the lives of the young talents he found in Port Harcourt, Davido noted that he will be giving the state’s entertainment sector a great attention. Fans storm venue of Davido’s video shoot for his new single with Duncan Mighty in Port- Harcourt.

Davido and Duncan Mighty have concluded works on a yet to be released single and on Thursday, August 16, the pop star arrived in Port Harcourt, Rivers State, where they are putting together the visuals for the song.

On the ground to receive Davido, who had arrived the city in the company of members of his DMW crew, his girlfriend Chioma and veteran cinematographer, Clarence Peters was a large turn-out of fans who had gathered to catch a glimpse of him.

Chants of ‘OBO’ filled the air as the large crowd followed him all around the town, as they gathered around the set of the video shoot.