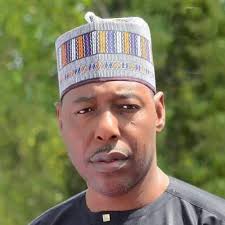 Borno State Governor, Profession Babagana Umara Zulum laid foundation stone Tuesday for the construction of 1000 houses Resettlement City in Monguno town that will house the over 89,000 Internally displaced persons from the northern part of the state comprising of Marte, Abadam, Kukawa, Guzamala, Monguno and Nganzai LGAs of the state.

The State Commissioner of Reconsttruction, Rehabilitation and Resettlement, RRR, Engineer Mustapha Gubio said the housing estate will be built purposely to relocate the 89,000 IDPs presently occupying schools and other government premises in Monguno town to enable the schools which has been occupied for years to function and resume their normal activities.

The housing estate which will cost the state government over five billion naira is expected to be completed within sux months and will comprise of schools, hospital, boreholes, post station, fire servic station, and housing management office,.

Zulum also laid foundation stone for the construction of a higher science and islamic school that will accommodate the science students from the Government Science Secondary School and other schools within the crachment area.

According to him, the school project will cost the state government about N75 million and is also expected to be completed within a period of about 3 months.

The State Commissioner of Education, Hon. Bello Ayuba said the Islamic School will fast track and expand Arabic and Islamic knowledge as Islamic studies in the area have great preference and priority.

He however lamented the closure of Arabic and Islamic schools in the area had experienced a serious set back and will also give the students , especially, the youths ample opportunity to acquire Arabic and Islamic knowledge by way of addressing illiteracy.

The commissioner added that the school will have all the necessary modern facilities and amenities including computer science required of a standard Islamic School along with adequate and trained teaching and administrative personnel.

No Cause For Panic Over Fuel Scarcity, Oil Marketers Assure Nigerians