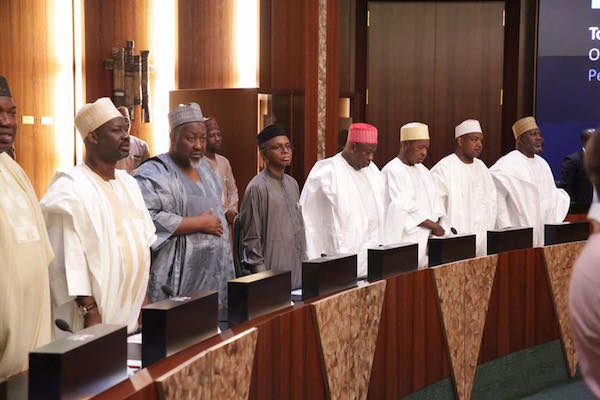 The 36 governors last night resolved to offset the backlog of salaries and pension arrears owed civil servants in the country as soon as the next tranche of payment from the Paris-London Club loan refunds are made.

This decision was arrived at in Abuja at a meeting hosted on Thursday night by the Chairman of the Nigeria Governors Forum and governor of Zamfara State, Alhaji Abdulaziz Yari Abubakar at his Maitama Residence.

The governors met in anticipation of the release of the other half of the Paris-London Club refund which has been gratuitously approved for payment by the Vice-President Professor Yemi Osibanjo. The funds are expected to hit the states accounts within the month.

The governors who are not oblivious of the hue and cry over the non-payment of the backlog of salaries and pension arrears and the precarious predicament of the Nigerian worker deliberated on the matter and concluded that in order to set the country on the path of growth, something immediate must be done to ameliorate workers plight by offsetting the backlog of their pay and emoluments.

The governors therefore resolved as a matter of urgency, to pay workers their due as soon as this half of the Paris Club refunds are made.

“We all agreed that a substantial amount from the next tranche of the Paris-London refunds be used in the settlement of workers salary and pension arrears,” the NGF Chairman, Abdulaziz Yari Abubakar disclosed.

Similarly, the governors committed to the verification of the input of all the consultants who claim to having worked towards the harmonization of the refunds regarding what is due to which state, since 2005 when the demand for the refunds commenced.

At the moment, there are litigations from more than ten different consultants still agitating for settlement for their roles in the quest to have the refunds made to states. In this regard, a committee was set up under the headship of Governor Femi Akeredolu of Ondo state with the governors of Bauchi, Mohammed Abdullahi Abubakar, Sokoto’s Aminu Waziri Tambuwal, Plateau’s Simon Lalong, Bayelsa’s Seriaki Dickson, Rivers’ Nyesom Wike and former Accountant General of the Federation and Gombe state governor, Ibrahim Dankwambo as members.

This committee is expected to finally provide a solution to the demands by consultants on the Paris-London Club refunds to states.

The forum also resolved to work harmoniously in a manner that would transcend all political affiliations so that all governors would speak with one voice on issues of national importance. To achieve this a committee made up of the Governors of Imo, Bayelsa, Abia, Ekiti, Kano, Nasarawa and Bauchi was constituted to work for the “reconciliation of the forum and the betterment of the country.”

“There is no how you’d mention any political development in Nigeria without mentioning governors. Governors are a bloc and a key component of this democracy.

Therefore, we have set up a seven-man committee to look into the development surrounding the unity of the forum and the development of the country. The idea is for governors to be speaking with one voice,” Governor Yari concluded.

Abuja Court Gives Nod To EFCC To Arrest Adoke, Etete, Others In Connection With Malabu Oil

11 thoughts on “Governors resolve to pay backlog of salaries”