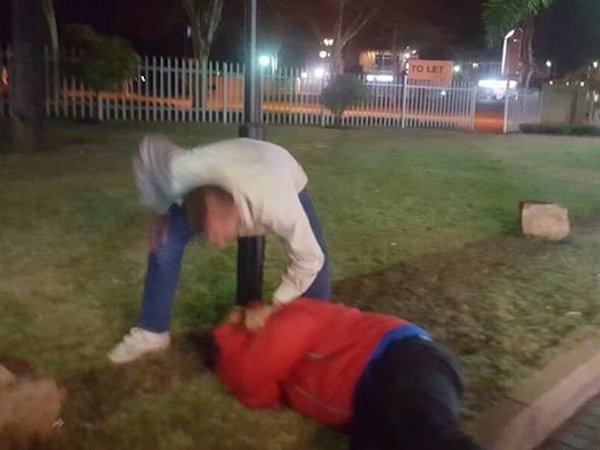 South Africa has been rocked by yet another suspected racial attack‚ this time on a couple waiting in line at a fast food chain in Pretoria.

In a video that has gone viral on social media‚ a black couple is shown being violently attacked by six white men at a KFC drive-through in Montana‚ north of Pretoria.

In the video two men can be seen approaching the woman before the hostile attack.

SAPS media spokesperson Captain Kay Makhubela said that six white men‚ driving in two separate cars‚ attacked the couple who were behind them in the queue.

Makhubela said that police were called to the scene and arrested four of the men. He said that two other men are still at large.

Makhubela said that a firearm was drawn and used to intimidate the couple.

In the video a man can be heard repeatedly yelling “Skiet hom” [shoot him].

Makhubela said that the couple was receiving trauma counseling and that he could not comment on the extent of their injuries.

“The four men were charged with assault and intimidation with a dangerous weapon. They appeared before the Pretoria North Magistrates court on Friday‚” said Makhubela.

The police are looking for any information that will lead to the whereabouts of the other two men.

According to news reports and posts on social media‚ the couple were attacked after they apparently requested the vehicle in front of them to move forward in the drive-through.

Police Minister Fikile Mbalula‚ posted the video on his Twitter account and called on the police to urgently investigate.

What you didn’t see on the plane