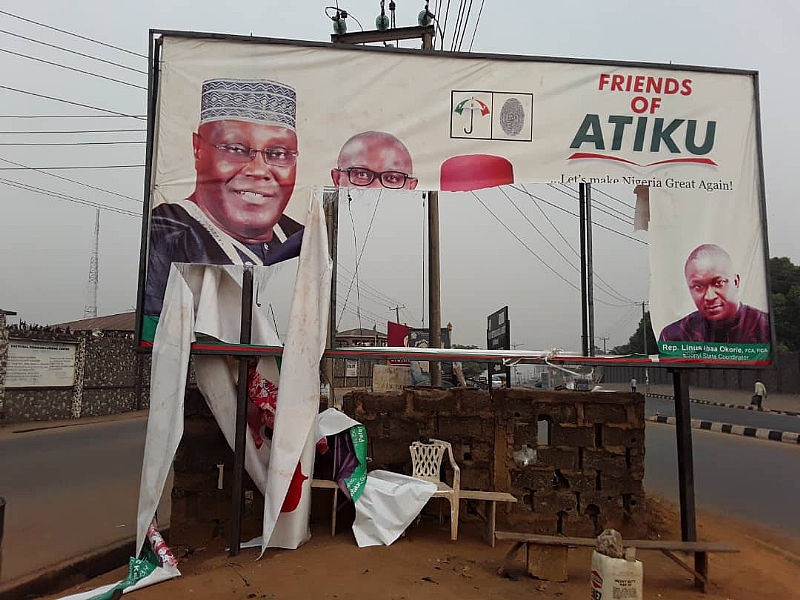 An Atiku support group in Ebonyi state, Friends of Atiku(FOA) has condemned in it's entirety the undemocratic act being perpetuated by some elements in destroying campaign billboard of People’s Democratic Party (PDP) presidential candidate, Alhaji Atiku Ababakar at the group’s office along mile 50, Abakaliki the state capital.

Addressing newsmen, Onicha local government Coordinator of Friends For Atiku, Comrade Nnamdi Ogbonnaya Onu told journalists in Abakaliki that there were suspicious movement of some persons around the office in the evening before the campaign billboard was destroyed.

He called on the supporters of the former Vice President of the country to remain calm and law abiding as according to him, the matter has been reported to security agents.

“This morning as early as 5:30 am, our phones began to ring getting calls from people living around our campaign office here at mile 50 Abakaliki that it has been attacked by some hoodlums. We rushed here and discovered that some of our billboards have been damaged by the hoodlums.

“We are surprised because we the Friends of Atiku are law abiding people because we are league of people; men and women, youths, the old and young in Nigeria who have identified with the wind of lets get Nigeria working again that started in last couple of months.

“To discover that some faceless individuals will take it upon themselves to attack us in this manner is something we are not going to take. In as much as we are not going to accuse anybody, we believe that for people to attack us, is doing that at his own risk. Even if you are doing it that somebody sent you from anywhere or any quarter, we know that Ebonyi as a PDP state cannot encourage anybody to destroy presidential candidate billboards.

“Yesterday, we noticed some unusual movement around here but because of the fact that we opened our gate wide open for people to come in. We have made former reports to security agencies to let everybody know that we are peace and law abiding people as friends of Atiku.

“What has happened is something highly despicable for anybody to think that destroying billboards is a way of enhancing his/her political popularity. We want to appeal to everybody to be steadfast in their support to our presidential candidate”, he said.