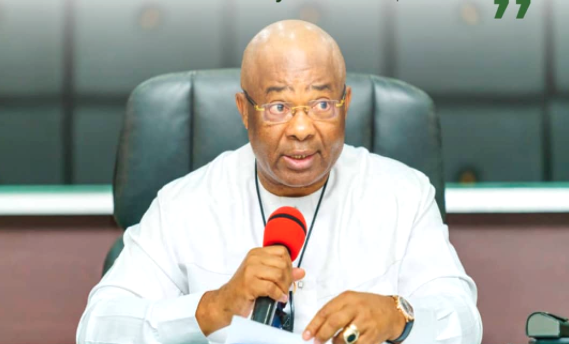 The Network Of Imo Youths, has applauded the Imo State Governor, senator Hope Uzodinma and the speaker, Rt. Hon. Collins Chiji over the peaceful and matured manner in which the ruling All Progressives Congress ( APC), took control of the state legislature.

The Group which described Governor Hope Uzodinma as a man of great political wisdom who understands the Imo political space, maintained that the governor’s choice of Chiji Collins as Speaker will go a long way to stabilize his administration, noting that with Collins, the Governor can now sleep with his two eyes closed.

This is even as the youths advised the Governor to counter desperate attempts and moves by desperate politicians who are bent on destabilizing his administration, as well as hijack the state Assembly and the APC party structure ahead of 2023 general elections by sponsoring media attacks, gossips and plots to remove the incumbent Speaker, Rt. Hon. Chiji Collins.

The youths said they gathered that some desperate politicians are sponsoring lawmakers loyal to them from Okigwe zone to undermine the current speaker, explaining that it would be dangerous to hand over the House to those plotting to recover Imo state for their own purposes.

In a statement signed by the Coordinator of the group, Comrade Amaefula Amadi, the group acknowledged chiji Collins as a decent, principled, committed, reliable and trusted politician who can not betray the governor for political or material gains.

According to the statement, the Speaker is the only ranking member who could be trusted and relied on to protect the Governor from Okigwe zone, adding that he is a proactive professional with an incorruptible passion for good governance and development.

The statement also warned desperate politicians to leave the Speaker alone to allow him concentrate on the task of joining the Imo state governor, Senator Hope Uzodinma to move Imo state forward.

The Order Of The Federal High Court Abuja: Chief Willie Obiano Is The Authentic Gubernatorial Candidate Of Apga

INEC will make future polls better than that of 2015: Mahmood Yakubu