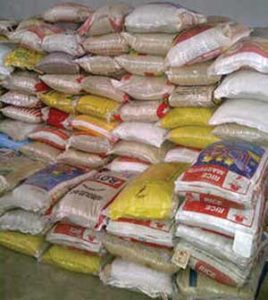 The Rice Processors Association of Nigeria (RiPAN) has raised an alarm that not less than 20 million bags of rice has been smuggled into Nigeria over the past three months.

The Chairman of RiPAN, Mohammed Maifata, said this in Abuja weekend during a chat with newsmen.

a�?Investors in Nigeria have made enormous financial commitment in the rice sub-sector. Unfortunately, the only threat to the industrya��s total development is smuggling. Over 1 million metric tons of rice, which is equivalent to about 20,000,000 bags of 50kg rice have been smuggled into Nigeria in the last three months.

a�?Nigeria currently loses huge revenues, foreign exchange and jobs to this menace as Nigeria rice processing companies are shutting down because of their inability to gain market access.

a�?More painfully, millions of small-holder farmers are stuck with their paddy because the millers can no longer afford to buy from them,a�? Maifata said.

He said Nigeriaa��s international land borders have been converted to smugglersa�� routes while the open markets are full of smuggled foreign rice.

a�?There is the need for urgent actions to avert eventual national food emergency by combating smuggling so that we can continue to grow our local rice industry and the economy,a�? he said.

While commending the efforts by the Central bank of Nigeria (CBN) in its intervention in the rice sub-sector of the economy, he lamented that investors in the country, despite their financial commitment, are met with the threat to the industrya��s growth due to the activities of smugglers.

RiPAN demanded immediate a�?raid of the various rice smugglers market across the countrya�?.

It demanded punishment for border security officials who aid smuggling of rice into the country.

He also demanded diplomatic action against neighbouring countries that encourage the smuggling of rice into Nigeria.

a�?The government may consider closing the borders for some time if diplomatic overtures fail,a�? he said.

6 thoughts on “Group raises alarm over a�?20m bags of ricea�� smuggled into Nigeria”