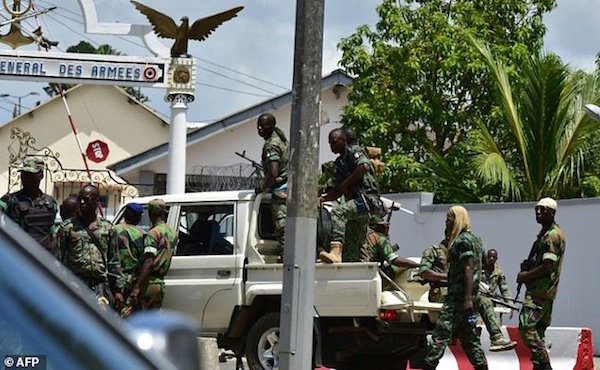 Abidjan – Disgruntled soldiers cut off access to Ivory Coast’s second largest city, Bouake, and gunfire rattled in other towns on Saturday as protests over a pay dispute extended into a second day despite government warnings of harsh punishment.

The revolt began in Bouake early on Friday before spreading quickly, following a pattern similar to a mutiny by the same group in January that paralysed parts of the West African state and marred its image as a post-war success story.

Mutineers seized control of the national military headquarters and defence ministry in the centre of the commercial capital Abidjan on Friday, leading to a tense standoff with soldiers from the elite Republican Guard.

And while the barricades there had been removed by Saturday morning, rebellious soldiers stepped up the pressure in Bouake, the epicentre of January’s uprising, blocking roads north and south out of the city.

“We do not want to negotiate with anyone,” said Sergeant Seydou Kone, one of the leaders of the uprising. “We’re also ready to fight if we are attacked. We have nothing to lose.

Kone said the mutineers were also active in the commercial capital Abidjan and the towns of Korhogo, Daloa, Man and Bondoukou.

The soldiers were revolting over delays to bonus payments, promised by the government after the January mutiny but which it has struggled to disburse after a collapse in the price of cocoa, Ivory Coast’s main export, caused a budget crunch.

The government has already paid 8,400 soldiers – most of hem ex-rebel fighters who helped bring President Alassane Ouattara to power – bonuses of 5 million CFA francs ($8,371) each as part of a deal to end that mutiny.

On Thursday, a spokesman for the group said they would forego demands for remaining bonuses of 7 million CFA francs following a meeting with authorities in Abidjan.

The decision was rejected by at least some of the soldiers.

Bouake residents said shops remained closed as soldiers fired weapons in the air and patrolled the streets in cars.

“The soldiers are wearing balaclavas and are threatening to move on Abidjan,” said Bouake resident Abou Kone.

In a statement broadcast on state-owned television late on Friday, Military Chief of Staff General Sekou Toure threatened the soldiers with “severe disciplinary sanctions” if they did not end the revolt.

In Korhogo, soldiers fired into air to disperse a group of residents that had gathered to protest against the uprising there, sending people fleeing home. Shops were shuttered and the streets were largely empty.

Mutineers also took control of the northern city of Odienne. And there was sporadic gunfire in Daloa, the main cocoa growing hub in southwestern Ivory Coast, the world’s top producer of the chocolate ingredient.

“Perhaps the government is tired of this, but they must sit down and talk,” said retired gendarme Valentin Sokoure, speaking near the military headquarters in Abidjan. “I just want the government to negotiate with the mutineers.”

Ivory Coast established one of the world’s fastest growing economies after emerging from a decade-long political crisis capped by a 2011 civil war. But deep divisions persist, particularly in a military assembled from both former rebel and loyalist combatants.