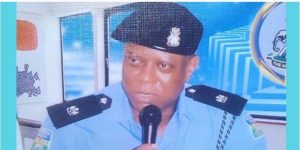 Chukwueggu was reportedly killed by the hoodlums, who wore police uniforms and mounted a roadblock around Asa, in the Obiehie area of Abia State.

Sources told PUNCH Metro that the DPO had travelled during the weekend to see his aged mother in their village in the Aboh Mbaise Local Government Area of Imo State.

One of the sources explained that the gunmen, suspected to be kidnappers, had around 7.45pm taken some persons captive by a roadside in Obiehie.

Our correspondent learnt that the hoodlums cut him with machetes in the back before shooting him in the head at close range.

a�?Chukwueggu, who was approaching the point where the hoodlums were standing, had stopped. He came out of his car to instruct them (bandits in police uniform) to stop harassing innocent people.

a�?He never knew that that they were not policemen. I think they identified him as a police officer and took him into a nearby bush where they attacked him with a cutlass and shot him in the head,a�? the source said.

It was gathered that the remains of the DPO had been deposited in a mortuary.

Our correspondent, who was at the Rumuolumeni Police Division, observed as policemen and officers at the division mourned while visitors came in to sign the condolence register.

a�?We have lost a fine officer; one of the best DPOs. He was professionally outstanding; a committed and dedicated officer; he did the job with passion.

a�?He was an ebullient police officer, who served humanity with all his strength. May the Lord grant him eternal rest,a�? the Rivers State CP wrote in the condolence register.

The late DPO left behind a wife, five children and an aged mother.

The state Police Public Relations Officer, Mr. Nnamdi Omoni, who confirmed the incident, told our correspondent that Chukwueggu was killed by a group of gunmen in Asa, Obiehie, while on the way back to Port Harcourt from his village in Imo State.

Omoni, however, said the details of the circumstances leading to Chukwueggu’s death were sketchy and he would not be able to speak further.

When Will Lagos State Government End Casualisation Of Its Doctors?