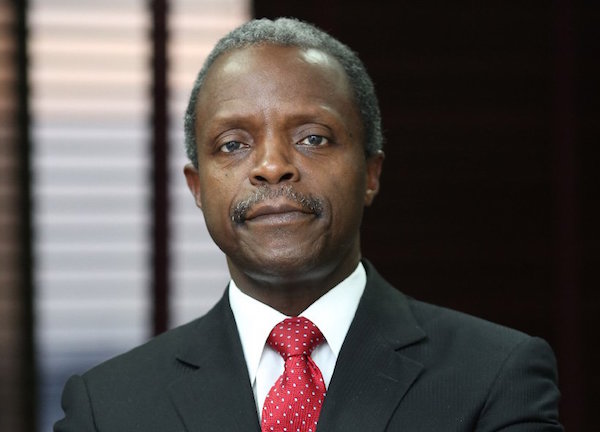 The Nigerian government on Saturday said before now, over 50 trucks in every 100 trucks of food sent to Internally Displaced Persons (IDP) in the North-East were being diverted.

It said the issue which has dogged food delivery to the IDPs was being addressed with the implementation of the Special Relief Intervention –an initiative launched by the Federal Government in Maiduguri on June 8.

The Senior Special Assistant to the Acting President on Media and Publicity, Mr. Laolu Akande, disclosed this in a statement.

The statement read: “There is considerable progress in the implementation of the Special Relief Intervention – an initiative launched in Maiduguri by the Federal Government on June 8 to deliver effective and comprehensive humanitarian aid especially food to persons displaced by the Boko Haram insurgency in the North-East, according to an update report made to Acting President Yemi Osinbajo, SAN, on Friday.

“The initiative which is part of a broad plan to address food shortage in the camps and other settlements of displaced persons, is now delivering assorted grains to internally displaced (through over 1000 trucks) and already have reached 12, 691 households in Borno State since the flag off by the Acting President on June 8.

“According to the update presented by the implementation team, the issue of diversion of relief materials including food and related matters which has dogged food delivery to the IDPs would be significantly curbed under the new distribution matrix adopted under the initiative.

“For instance, over 1000 trucks of assorted grains are now on course, delivering the grains intact to beneficiaries since the commencement of the present programme as against the reported diversion of over 50 trucks in every 100 trucks sent to the North-East.

“Having listened to a presentation from the team overseeing the Special Relief Intervention, at the Presidential Villa in the company of National Assembly members from the northeast, the Acting President described the initiative as “a unique operation that promises to deliver on a well laid out plan, assuring all that the process would remain transparent and the objectives fully actualized’’.

He added that aside the emergency food distribution, “Government will deliver on a wholistic plan that includes empowerment because empowerment is an important feature of the relief intervention.’’

The Acting President said though “the problems are immense and huge, especially when the enormity of the problem is compared to available resources,’’ the Federal Government remains determined to deliver humanitarian aid through a process that is transparent and effective.

Prof. Osinbajo solicited the support of the National Assembly especially from members representing the region, to enable government realise its objective of maintaining an effective humanitarian service delivery, led by the Nigerian government.

According to him, “we must support this team because a lot of attention is focused on us especially including from the international community.”

“We need to be responsible and do this efficiently, and monitor performance on a regular basis. It is a good opportunity to prove that we can handle these efforts very well,’’ Prof. Osinbajo added.

A total of 656 armed police personnel would be involved in the movement of assorted grains from various reserves across the country to designated NEMA warehouses in the North-East for onward distribution to beneficiaries.

Another 1,376 military personnel would escort the grains to some IDPs in the hinterlands across the affected states of Borno, Adamawa and Yobe.

Lawmakers present at the meeting made observations about the mode of intervention and the kind of aid provided to the IDPs.

Some of the lawmakers called for the integration of empowerment and provision of agricultural inputs as part of aid provided to the IDPs, under the present phase of the Federal Government intervention.

The new distribution matrix would entail moving grains from the reserves to the NEMA warehouses for onward distribution to camp stores and to the beneficiaries’ door posts.