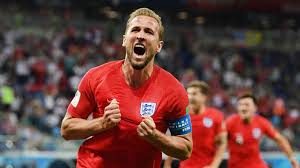 Gareth Southgate’s side missed a host of gilt-edged chances in the first half and were then frustrated by a resolute Tunisian side who looked to have claimed a vital point. But Kane popped up in the 91s minute to head England to victory from a corner.

England came out of the blocks at pace and could have been in front after just three minutes when Jesse Lingard saw his close-range effort superbly kept out by Mouez Hassen.

England then worked another fine move as Dele Alli fed in Lingard, who squared the ball for Sterling who somehow got his feet wrong and sent the ball wide of an empty net. Luckily for Sterling, the flag had gone up for offside against Lingard to make his miss meaningless.

But England did not have to wait long for the goal as Harry Kane netted in the 11th minute. John Stones met Ashley Young’s corner with a great header, and even though goalkeeper Hassen made an excellent save to claw it out the ball fell to the feet of Kane who slotted home from just three yards out.

Hassen had been excellent in the early moments and had already had treatment for an injury before making that save. He aggravated it again and was forced off in tears after just 15 minutes, Farouk Ben Mustapha coming on in his place.

Lingard then missed a fine chance to double the lead when picked out at the far post by a lovely ball from Ashley Young, but he got his feet all wrong with the goal at his mercy.

Tunisia finally got a sight on goal when Fakhreddine Ben Youssef headed wide from a Ali Maaloul cross.

The North Africans were level in the 34th minute when Kyle Walker caught Ben Youssef with his arm on a cross and the referee pointed to the penalty spot. Ferjani Sassi stepped up and made no mistake, just beating the outstretched arm of Jordan Pickford.

Alli appeared to be struggling with an injury, with Fabian Delph ready to come on, but he managed to shake off the knock.

As half-time approached England worked a clever free-kick situation with the ball falling to Lingard unmarked, but he could only hit his shot against a defender. Lingard then got through again and tried to poke the ball home, but while he beat Ben Mustapha the shot hit the outside of the post.

Alli had the first chance of the second half six minutes after the restart as his header was held by Ben Mustapha.

England were dominating but struggling to create anything of note. Kieran Trippier sent an effort just past the post before Naim Sliti shot well wide in a rare Tunisia attack.

Young then had a chance with a free kick but curled his effort well over, but England couldn’t find any way through as Tunisia went increasingly defensive to claim a point.

But their tactic didn’t pay off as England won a corner in the first minute of added time. Trippier’s delivery was headed on to the unmarked Kane at the far post, and he made no mistake with a fine close-range header.