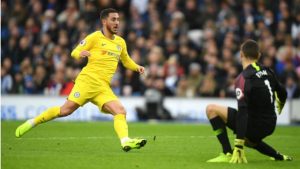 Eden Hazard insists Chelsea have not given up hope of winning the Premier League title this season, despite remaining seven points behind Manchester City.

Hazard starred for Chelsea on Sunday, scoring one and setting up another as Maurizio Sarri’s side  beat Brighton and Hove Albion 2-1 at the Amex Stadium.

The victory took Chelsea to within two points of third-placed Tottenham, although there is still a sizeable gap between the Blues and pacesetters Liverpool and City.

Hazard, however, was in bullish mood, revealing that the Chelsea squad believe they are capable of catching their rivals, even if manager Sarri has continuously played down any hopes of a title challenge.

“Of course, we want to be top of the league at the end of the season,” Hazard, who went off late on after sustaining a knock in a heavy collision with Dale Stephens, told  Sky Sports .

“I know Manchester City and Liverpool are good teams, but we are with them and don’t want the gap to be any bigger than it is now.

“We want to win and be the best team in England.”

Chelsea looked set to be cruising to a comfortable win on the south coast until Solly March’s 66th-minute effort set up a grandstand finish, and Hazard acknowledged that the Blues could have put the game to bed sooner.

“Of course, the way we won, it was hard to win in the end,” the forward added.

“This game was one of the most important of the season, especially after such a big game against Manchester City.

“We knew at half-time that we wanted to score a third, when you are 3-0 up it is not easy for the opponent to come back.

“But we didn’t, and at the end you could feel the pressure a bit in the last five, 10 minutes, but we managed the game well and we just deserved to win.”

Chelsea face Bournemouth at home in the Carabao Cup quarter-final on Wednesday before hosting Watford in the Premier League next Saturday.

Hazard has  been linked with a move to Real Madrid , but Sarri will be hoping to keep hold of his talisman as Chelsea look to climb the table.