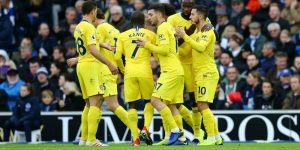 Eden Hazard scored one and made one for Chelsea, who saw off a second-half Brighton fightback to secure another victory.

Pedro’s 17th-minute goal, created by Hazard, put the Blues ahead.

Hazard darted into the Brighton penalty area and superbly picked out Pedro, who scored at the far post – the Spaniard’s sixth goal of the season and Hazard’s fourth assist in as many Premier League matches.

A couple of minutes after Marcos Alonso almost made it 3-1 when his strike from the edge of the penalty area hit the post, Solly March hauled Brighton back into the game by hooking the ball past keeper Kepa from close range.

Chelsea held on to take the points but, on a less positive note, Hazard was taken off late on after appearing to pick up a knock.

Onuachu Leads Nigeria To Beat Egypt 1-0, With The Fastest Goal In History

10 thoughts on “Hazard inspires Chelsea to victory at Brighton”