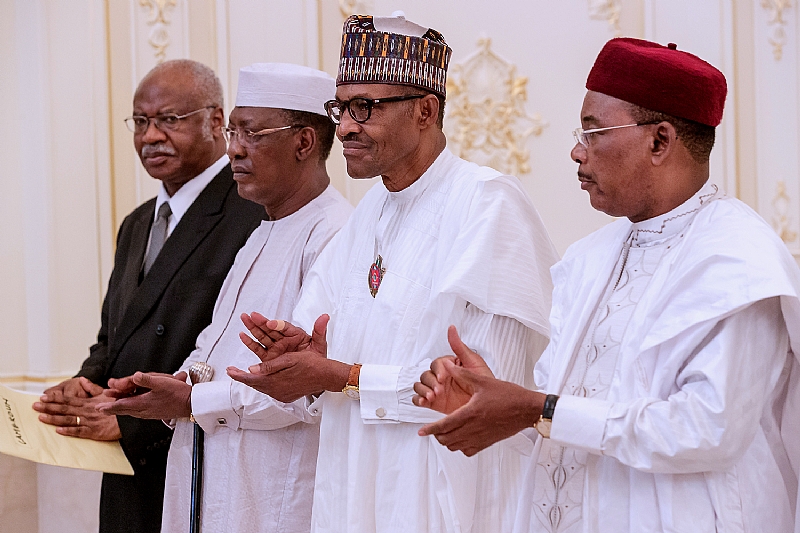 The summit of Heads of State and Governments of the Lake Chad Basin Commission (LCBC), comprising of the Nigerian, Chadian, Nigerien, Cameroonian, Central African Republic and the Beninoise governments yesterday adopted an eight-point agenda to end Boko Haram insurgency.

The meeting which was chaired by President Muhammadu Buhari in Abuja had in attendance President Idris Deby Itno of the Republic of Chad, President Mahamadou Issoufou of Niger Republic and Prime Minister of Cameroon, Philemon Yang, who represented President Paul Biya.

An eight-point agenda was considered and adopted on the Defence and Security committee of the LCBC chaired by the Nigerian Chief of Defence Staff, General Abayomi Gabriel Olonisakin.

The meeting was second to the one held in N’djamena, the Chadian capital, last month.

The eight-point agenda reads: “Renewed their commitment to the fight against Boko Haram terrorists with a view to bringing a definitive end to the insurgency; Reaffirmed their commitment to the accelerated implementation of the Regional stabilisation strategy in the areas of Lake Chad affected by Boko Haram crisis which was recently endorsed by the African Union Peace and Security Council; Agreed, in this context, to implement Quick Impact Projects (QIPs) within the limits of available resources to provide immediate relief to the communities affected by Boko Haram insurgency; Recognized the important role of local community leaders in the fight against terrorism and Agreed to seek the support of the community leaders to strengthen the fight against terrorism.

Others include “Expressed appreciation to the African Union Peace and Security Council for renewing the yearly mandate of the Multi-National Joint Task Force for the year 2019; Expressed appreciation to partners and international community for their support and contribution, and urged them to extend additional assistance to the LCBC/MNJTF to eradicate the Boko Haram insurgency to reinforce global peace and security; and Directed the Committee of the Chief of Defence Staff to meet regularly to assess the security situation and the efforts being made to bring an end to the insurgency.”

In his remark, President Buhari said the agenda will bring a new dynamism in the fight against Boko Haram and their international affiliates.

Buhari added that the Lake Chad region has suffered decades of neglect and poor infrastructural development and that the Boko Haram crisis in the last eight years has worsened its already bad situation.

The president noted that cognizance must be taken of the fact that sustainable growth and development of the sub-region was dependent on the quick attainment of peace and stability in the area.

“We must put an end to the crisis in the sub-region to enable meaningful development for its people. We must remain resolute and committed in our collective efforts at attaining peace as well as eradicating terrorism and violent extremism from the sub-region,” Buhari said.

He also emphasized that time has come for the evil of Boko Haram to be brought to a definitive end.

“I am sure that this summit will take the right decisions in this regard. This is a fight to the finish. We must, and we will, by the grace of God, wipe out terrorism from our sub-region,” Buhari said.

The president further said that while executing the war against the Boko Haram terrorists, they must not be oblivious of the fact that military may not provide the desired results alone.

He also stressed that there was the pressing desire for all member countries to pursue simultaneously both military and developmental approach to the challenges of the region.

“We will work towards strengthening of Civil-Military Cooperation in the fragile areas of the region to accelerate the implementation of the Regional Stabilization Strategy.

“Our military strategy must be complemented by the mobilization and deployment of adequate resources to ensure the reconstruction, rehabilitation and rebuilding of civil authority, as well as the provision of relief and succor for the affected,” Buhari said

According to him, the Inter Basin Water Transfer project to recharge the disappearing Lake Chad would also go a long way in the restoration of sustainable peace and security to these areas.

He also paid tribute to troops fighting the insurgents while urging them to remain steadfast in fighting the war with the highest sense of honour, professionalism and patriotism gallantly.

After Six Years In Court, Man Gets 17 Years’ Imprisonment For Kidnapping Journalist