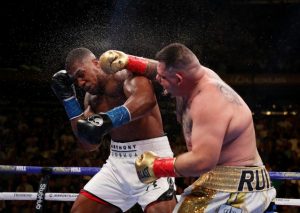 Rob McCracken, Joshua’s trainer, recently confessed he was aware the 29-year-old was concussed in the third round of the fight with Ruiz Jr in June this year.

He said: “It’s a shocking admission, but it’s highly unlikely this is an isolated incident.

“Trainers have a duty of care to their boxers and it seems clear that Anthony Joshua’s trainer’s sole priority was winning that fight, not protecting the fighter from a potentially fatal injury.

“In that point he was particularly vulnerable to a more serious injury. One wonders how many deaths in the ring over the years have resulted from a win-at-all-costs mentality.

“In every other major sport, concussion protocols state that once a concussion has been suspected, the player must be removed and not allowed to return.

“Every blow delivered by a fit, strong, technically gifted boxer has the potential to cause a concussion.”

The heavyweight boxer suffered the injury in the first of four knockdowns he suffered during the seven-round contest, but was allowed to play on.

Recently analysing the defeat, McCracken, who is also Team GB’s performance director, revealed: “I knew he was concussed and I’m trying to get him through a few more rounds, one round at a time, and see where he’s at.

“But he was glazy-eyed from when he got caught with that initial shot in round three and he carried that with him up until the end.”

Following Headway’s statement, McCracken moved to to clarify his comments.

The 51-year-old explained: “I am not a doctor and it may be that concussed is not the right term to have used.

“The health of all the boxers I work with is of paramount importance to me and I have always used my judgement and experience to do what is right for them.

“There is no formal concussion protocol where the doctor steps in to assess the boxer so you have to use your experience as a coach and your knowledge of the person to make a decision on whether you think they can recover.

“I have had this a number of times in my career in professional boxing where boxers have recovered from a difficult round to go on and win the fight. I have also pulled boxers out of fights because I knew it was not in their interests to continue.”

Headway previously called for boxing to be banned, following the death of 28-year-old Russian boxer Maxim Dadashev this year as a result of brain injuries.

Chelsea wing back hit by hamstring injury, pulled out in team's loss to Crystal Palace