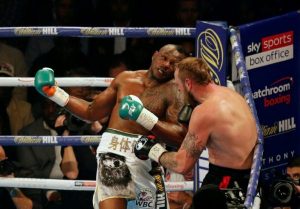 Briton Dillian Whyte’s dream of a tilt at a world heavyweight title after a violent and troubled childhood moved a step closer on Saturday with a unanimous points win over New Zealand’s former world champion Joseph Parker.

The 30-year-old Jamaica-born Whyte, who was shot and stabbed in his youth, will hope to move on to a bout with either Joshua or American Deontay Wilder.

Parker, suffering his second successive defeat — he lost to Joshua in March and with it his WBO belt — faces a tough battle to get back into the world title mix.

“I want to fight Joshua in a rematch (in April),” said Whyte, who is nicknamed ‘The Body Snatcher’.

“We would be ready. I might be out again in October.

“I’m still so inexperienced and have so much to learn. There is still another 40 percent to come. It was a great fight, I love this man (Parker), we showed respect it was really good.”

Parker was gracious in defeat.
“I gave it my best, the better man won,” the 26-year-old told Sky. “It has been an amazing journey, but it is just the beginning.”

Parker went down in the second round and received a count, although it appeared it was due to a clash of heads rather than a punch from Whyte.

The Briton started to work his way into the bout from the fourth round, even if he swung some wild punches that met fresh air, as Parker tired.

By the sixth Whyte was landing more effectively and Parker looked spent.

Parker’s corner tried to rally their man telling him before he went out for the eighth that Whyte was exhausted and had achieved nothing in the preceding round.

Whyte quickly disabused Parker of that notion as he put him on the canvas with a left hook.

Parker needed a knockout to win and out of the blue he raised his game in the 11th and penultimate round landing several punches to the extent Whyte for the first time looked troubled.

Parker threw caution to the wind in the final round and put Whyte down with less than 30 seconds to go, the Briton clambering to his feet and just holding on.

There was a classic heavyweight encounter in the bout preceding the main event between unpredictable Briton Dereck Chisora and Cameroon-born Frenchman Carlos Takam, two fighters who have had their chance at world title glory.

Chisora remarkably got the win he desperately required after three losses in his last six bouts — including against Whyte.

Having looked outclassed early on, he came up with a cracking punch to put Takam down in the eighth. Although the 37-year-old got back up, Chisora sent him back to the canvas with his next punch.

The referee brought the curtain down in all likelihood on the loser’s hopes of another tilt at the world title but 34-year-old Zimbabwe-born Chisora said he could dream again.

“It was tough but this fight was very emotional for me. I want to dedicate it to my daughter and missus. Takam is a true tough African boy,” said Chisora.

“In the later rounds I thought it’s time to send it home. He didn’t hurt me — I’m English nobody can hurt us.

“I’m bad. There’s no two ways about it but when I step in the arena I want to fight for the fans.”

Further down an impressive undercard Rio Olympic bronze medallist Joshua Buatsi eased to his seventh win since turning professional, making light work of Latvia’s Andrejs Pokumeiko, knocking him out in the first round of their light heavyweight bout.

The 25-year-old’s promoter Eddie Hearn predicts great things for Buatsi, who is managed by Joshua.

“You are watching the best prospect in world boxing,” said Hearn.

“In world level he is going to be special.”

Bournemouth come from behind to draw 2-2 with Liverpool