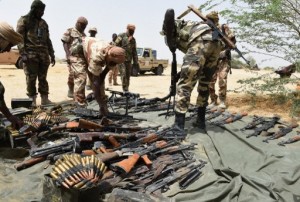 Two personnel of the newly launched Operation Whirl Stroke were feared killed by suspected herdsmen at Tseke village, a border community between Taraba and Benue states, in Logo Local Government Area of the state.

Sources in the area also disclosed to newsmen that the armed herdsmen, who ambushed and killed the soldiers early yesterday, also abducted other soldiers and set one patrol vehicle ablaze.

Our source, who spoke on the condition of anonymity, said, “the community is a Tiv/Jukun settlement and it is a border community, where you can hardly draw a border line between Benue and Taraba states.

“From what we have gathered so far, two of the soldiers were killed, some were taken alive and one of their patrol vehicles was burnt.

“We also heard that some of the soldiers were still unaccounted for, which means that the casualty figure might be higher when the true picture of the attack becomes clearer.”

Chairman of Logo Local Government Area, Mr. Richard Nyajo, who confirmed the attack to newsmen Sunday night, explained that the incident, which happened between 7am and 8am, claimed the life of one soldier on the spot while the other soldier was critically injured and might not survive his injuries.

“It happened in Logo LGA. I gave them a base at Mbagegh Council Ward. So, in the course of carrying out their peace-keeping operation, they went into the bush and I don’t know whether the herdsmen heard about them and ambushed the soldiers.

“The herdsmen burnt one of their patrol vehicles, injured some of them, took some alive and killed one person but the second person was seriously injured and may not make it because he was in bad shape.

“Though one was said to be missing by tomorrow we will get a clearer picture of the situation, including the actual number of deaths, because when there is an attack on a group of people like it happened and some are missing you cannot just conclude on the casualty figure.

“But surely some were killed and some were abducted. Though many among those that were missing escaped alive, by tomorrow we will get a clearer picture of the situation.”

Efforts to get a reaction from the operational base of the Operation Whirl Stroke on the incident failed as the personnel who picked the call through one of their dedicated numbers declined to comment on the matter.