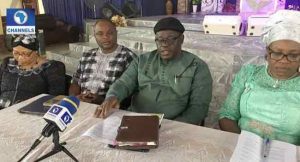 The leadership of the Pentecostal Fellowship of Nigeria (PFN) in the South East on Sunday rejected the proposed plan by the Federal Government to establish cattle colonies in state across the federation as a means to solve the farmers and herdsmen clashes.

The Vice President of PFN in the region and former Imo State Chairman of the Christian Association of Nigeria (CAN), Cosmas Ilechukwu condemned the plan in strong terms after a national leaders meeting in Owerri, the Imo State capital.

Ilechukwu said that cattle belonged to individuals and not the entire nation.

Reading out a 12-point communique to journalists, Ilechukwu rejected the planned establishment of cattle colonies.

a�?It will be a gross abuse of office to take over people’s landed property and give to a group of others for their private business,a�? he said.

On the incessant attacks in Benue, Kaduna, Adamawa and Taraba States, Ilechukwu said that PFN condemned the gruesome murders, insisting that it was not a communal clash but well-planned and properly coordinated attacks on Christians.

He scored the security operatives low in their manner and approach in tackling the issue.

The association appealed to Christians across the country, especially in the northern part of the country not to take the laws into their hands but they must be security conscious and pray to God for these incessant attacks to cease. (Channels TV)