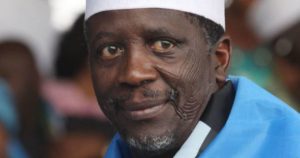 A former governor of Sokoto state, Alhaji Attahiru Bafarawa, on Friday lent his voice to the reoccurring herdsmen attack in Benue State, expressing fears that the 2019 elections may be stalled unless the Federal Government quickly finds an enduring solution to the persistent killings in the State.

The ex-governor made this known during a condolence visit to Benue State Governor, Samuel Ortom, on the recent mayhem in the state.

He said there can be no election in a state of uncertainty and unrest.

He said: a�?Why would there be elections in 2019 where there is no peace?

a�?The most important thing you can bring to society is peace. When you bring peace to them, then you have brought life and you can talk of election.a�?

He said Benue has produced Nigerians who have played active roles in uniting the north, adding there can be no north without Benue State.

Bafarawa added: a�? Chief Audu Ogbeh and Senator Barnabas Gemade, at different times, became national chairman of the People Democratic Party (PDP),because they are from the north and the slot was meant for the northern part of Nigeria.

a�?I’m not here for political purposes but to console my brother. However, I must put the record straight.a�?

The former governor described the killings in Benue State as politically motivated and therefore should be resolved politically.

a�?But these immigrants don’t speak Tiv language and don’t know who is who.

a�?Therefore, the problem is solvable. What government needs to do is to block these people from coming into the country.

a�? The local Fulani l know carry sticks and crack jokes with everyone, they don’t carry guns.a�?

He asked President Muhammadu Buhari to involve all stakeholders irrespective of their political affiliations to come together and solve the problem.

11 thoughts on “Herdsmen killings: There may be no elections in 2019 a�� Bafarawa”