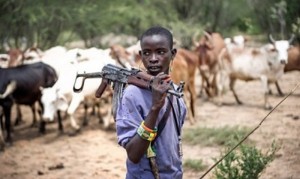 Suspected herdsmen, Saturday evening reportedly shot dead one Mr. Mtserikyaa Hiimo between Iorza and Jootar along Anyiin-Gbeji road in Logo local government of Benue State. Vanguard gathered from a sources that the victim unknowingly ran to a road block mounted by armed herdsmen on the axis of the town.

According to the source, a�?we have been having cases of herdsmen coming out in their numbers and mounting road blocks in communities around Logo local government area. a�?They do it intermittently and kill unsuspecting victims and nobody knows where and when they would undertake the mission, but that not withstanding, we have been consciously going about our daily activities.

a�?Unfortunately, on Saturday evening the victim was coming in his car from Gbaji when he ran into the road block at Jootar on Anyiin-Gbeji road. a�?From what we gathered, the assailants who were dressed in military fatigue stopped their victim on that road and shot him severally after which they fled.

a�?The gunshot from the assailants attracted the locals who ran to the seen only to discover the victim dead in his own pool of blood but his killers were seen fleeing into the bush. a�?The matter was reported to the Police at Anyiin but his remains have been taken to the mortuary at Ugba the local government headquarters. When contacted the State Police Public Relations Officer, Assistant Superintendent, ASP, Moses Yamu said he was yet to receive reports of the incident.