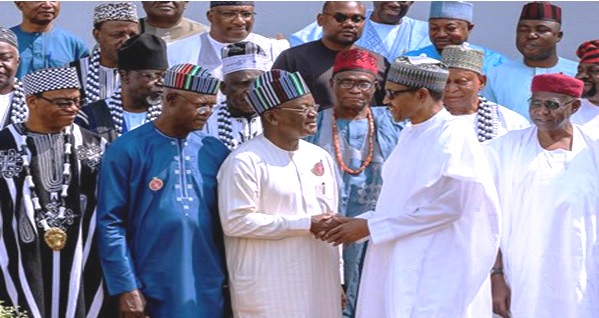 Something epochal and unique amazed the senses of Nigerians on Monday, January 15, 2018. President Muhammadu Buhari had an exclusive audience with a Benue delegation led by the state Governor, His Excellency, Governor Samuel Ortom to fraternally dialogue and explore ways to resolve the internecine conflict between herders and farmers in our home state.

The Benue delegation to the Presidential villa in Abuja was by no means, a venerated assemblage of state leaders, which never watered its substance by partisan trappings. The team which met with Mr. President comprised political leaders, traditional rulers and elders of the state. The Tiv Paramount Ruler, Tor Tiv V, HRM Orchivirigh Professor James Ayatse also registered presence personally.

The mutual parley became imperative based on the seed of discord sawn by enemies of the people as reflected in the herders and conflict. The conflict appeared to have exacerbated with the New Year Day bloodbath in Guma and Logo LGAs of Benue State.

No doubt, the pains and sorrows from the dastardly acts created loopholes and cracks which have been actively exploited by intolerant elements, perpetually committed to the disunity of Nigeria. There have been bitter conversations, misconceptions, inexplicable theories and trenchant calls for the severance of the essential cord that binds and unites the people as Nigerians and, especially, Northerners in this instance.

However, President Buharia��s utterances; his unexpressed feelings and intentions all pointed to the mindset of a President not just saddened by the unfortunate incidents, but determined to invoke the full wrath of the law on the perpetrators of the evil. More pungently, Buhari was unambiguously insistent on the necessity of tolerance in all interactions among Nigerians no matter the bitterness and disappointments.

But decoding this flank of the series of President Buharia��s messages in specific connotations to the Benue delegation and by implication, Northern Nigerians, it reminded of the timeless message of the revered modern beacon of the Northern region, the Sardauna of Sokoto, Sir Ahmadu Bello, who once echoed that ;

a�?Here in the Northern Nigeria we have people of many different races, tribes and religions who are knit together to common history, common interest and common ideas; the things that unite us are stronger than the things that divide usa��a�?

This message encapsulates twin indispensible ingredients of national cohesion and progress- tolerance and its end-result of unity. It is not just for Northerners in the specific instance alone, but a recipe for peaceful and harmonious co-existence of all Nigerians. Therefore, the same engrained spirit unconsciously or consciously spurred President Buhari when he met the Benue delegation in the light of the herders/farmers bloody skirmishes by declaring;

a�?Your Excellency, the governor, and all the leaders here, I am appealing to you to try to restrain your people. I assure you that the Police, the Department of State Security and other security agencies have been directed to ensure that all those behind the mayhem get punished. I ask you in the name of God to accommodate your countrymen. You can also be assured that I am just as worried, and concerned with the situation.a��a��

The Presidenta��s drift must not be lost on the altar of any personalized interpretations. The audience before him was Benue leaders; but indubitably, they assumed his ordained status of leaders, representative of Nigeria. Therefore, he was conveying a message wrapped in a template that is relevant to all segments of Nigeria. Put differently, Buhari was addressing Nigerians through their leaders on the dire necessity of tolerance and hospitality to fellow countrymen and women as worthy virtues to imbibe.

The Presidenta��s endearing message on tolerance was quite inspirational and thought-provoking. The unuttered feelings were unmistakably that in all human existence, anywhere around the globe, disagreements are bound to exist and, sometimes, expressed with violence.

It is undeniably the consequences of intolerance, which is a solution-provider and problem-solver in most disputes, ultimately harvesting peace and unity. Enmity, hate and bloodshed could be averted when tolerance of one anothera��s excessiveness is accorded its prime position in the hearts and lives of people.

But the import of the Presidential message is open for every community, ethnicity, section or region to ruminate and accord it a special place in existence. Northern Nigeria particularly with its disparate peoples and cultures, must necessarily accept and consummate a resurrection and refinement of this message of tolerance from Mr. President.

More than a few would agree that the North of yesterday or in the days of Sir Ahmadu Bello appears to have lost track of its communal values and soul, which exuded tolerance, peace and unity. It now radiates with destructive flames all too often. And the unfortunate development is creating avoidable lacunas actively exploited by a�?emergency friendsa�? of the North.

In the days of yore, the geographical North was home to all Nigerians irrespective of tribe or religion and what propelled this seamless relationship was tolerance, mutual trust and understanding. But these virtues and values have regrettably eclipsed among Northerners.

Today, there is a damaging resort to inexplicable inclinations and pursuits of the self-interest, as against the collective. Hate and vengeance have replaced fraternity and unity.

The delight to resolve differences through the sword, rather than dialogue has negatively redefined the social architecture of the people. These proclivities cannot offer any remedy or solace to the affliction or even developmental challenges of the people. It is time for self-assessment and a conscious reabsorption of the abandoned old positive values.

Benue state particularly, should refresh its cord of brotherhood with dialogue, which a few years back, had Kaduna as the proud epicenter of Northern dialogue, hub of Northern intellectualism, and unity. This should replace the apparent tilt to the deceptive voices from the South, hell-bent on exploiting the conflict among brothers to their advantage. The same elements preaching the artificial friendship would desert the people once they succeed in stoking and consolidating the fire in Benue or anywhere else in the North.

No Nigerian is oblivious of the endowments and blessings of Benue as a beautiful bride, courted by virtually all. But it must not lose sight of the reality that not all the suitors are genuine, as many are masquerading vampires and disguised torturers or preys waiting to devour the people at the slightest opportunity.

If Benue people consciously expose themselves to their machinations, it would make them very vulnerable and such posturings have serious setbacks on the entire region, as peace not secured at home, would certainly elude you in foreign lands.

There is therefore, there is the need for a rethink, as no problem among brothers would defy solution with dialogue. And it imposes the necessity to re-embrace the Kaduna tradition with its motely of dialogue vents for peace and unity. No sacrifice should be considered too much for the peace and unity as canvassed by forefathers.

The most auspicious time, when leaders are expected to deploy wisdom or think with undiluted senses is now, rather than the casual glance at issues, as fired by the tide of a�?disastera�? commentators.

Benue state Governor Ortom must be alert before he is consciously hoodwinked to throw the proverbial baby together with the bathwater. It is neither love nor affection, if a man who sights your house on fire, but offers you fuel, instead of water to quench it. The same man would disappear from sight when the fire explodes uncontrollably.

The signs are already manifest, as can be gleaned in the incident of the recent conflagration in parts of Makurdi, as none of the war canvassers risked any assistance to the people of Benue. It was the same Benue leaders and people, who resolved to initiate dialogue and applied their capacity for peace building, in conjunction with Nigerian Security agencies that quenched the conflagration. These are great and enviable lessons in self-worth.

The recent memories of IPOBa��s Nnamdi Kanu saga is relevant and suitable here. At his time of tribulation, the great warmongers on social media; the activists and the venomous voices of a�?emergency friendsa�? scurried away, at the sight of the a�?Pythona�? when he arrived the doorstep to stage a dance. Tolerance and dialogue is the panacea to peace and unity. But war is destructive and irrecoverable. Nigerians should adopt it as a national anthem.

Agbese writes from the UK.