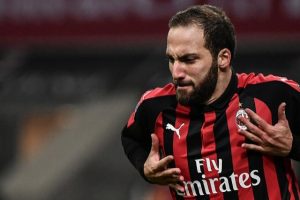 Higuain joined Milan on a season-long loan from Juventus in July with an option to make the deal permanent, but he has struggled to settle at San Siro, scoring eight goals in all competitions.

“Chelsea have an agreement with Higuain to take him immediately,” Gazzetta reported.

The 31-year-old Argentina international reportedly wants to join his former Napoli coach Maurizio Sarri at the English club, who would take over Milan’s option to eventually make the deal permanent.

Milan paid 18 million euros ($20.75 million) to sign him on loan, with a clause to make the deal permanent for a further 36 million euros.

Higuain had his most successful season under Sarri, breaking the Serie A goalscoring record with 36 goals in the 2015/16 campaign.

He scored 91 goals during his three years at the club before moving to Juventus in 2016 when the Turin club activated his 90 million-euro buyout clause.

He scored 40 league goals in two seasons for them, but left for Milan in the last close season after Cristiano Ronaldo’s arrival in Turin.

He was hampered by a back injury earlier in the season but broke a two-month goal drought just before the winter break.

However, Milan sporting director Leonardo warned on Tuesday he had to get down to work.

“He had a tough moment, he has to put it behind him and get to work,” said Leonardo.

“A goal can change things, but if he is to continue here, he needs to take on responsibility.”

“He is here right now. Seeing as he is here, he needs to get down and actually do something for this team.”

Chelsea close on United after 2-0 victory over Brighton