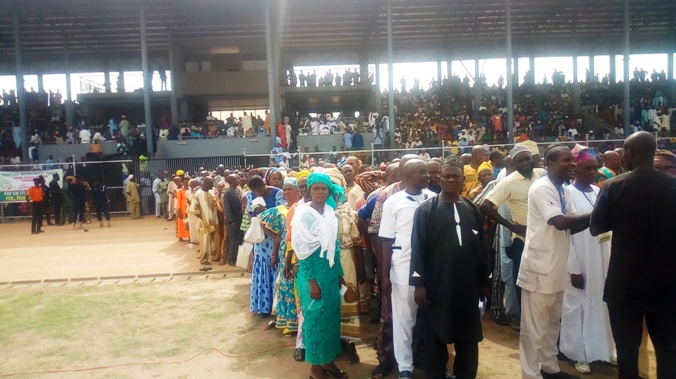 The Peoples Democratic Party in Osun State has elected Honorable Soji Adagunodo as the new State Chairman after the successful completion of its ward, local and state congress.

Adagunodo and his 29-member of the State Working Committee emerged unopposed during the congress which was held at the Osogbo City Stadium.

A team of officials of PDP from the National Secretariat Abuja led by Senator Ben Collins Ndu and Dr Emmanuel Agbor conducted the congress while the process was observed by the Independent National Electoral Commission (INEC).

Operatives of the Department of State Security Service (DSS), Nigerian Security and Civil Defence Corps (NSCDC), and the Nigeria Police ensured security at the venue.

The National Deputy Publicity Secretary of the party, Prince Diran Odeyemi and a member of the House of representatives, Honorable Busayo Oluwole described the congress as transparent, free and fair.

In his acceptance speech, Adagunodo expressed joy that the party was able to resolve its two years crisis. He said he would lead the party to liberate the people of the state from what he described as “terrible oppression by the All Progressive Congress”.

He lauded the National Chairman of the Party, Prince Uche Secondus, the National Working Committee and the National Executive Council of the party for saving Osun PDP from total collapse.

His words “I commend their sense of justice and fairness in breaking the logjam which has bedeviled our party in this state for long and allow the constitution of our party to reign supreme through this internal democratic process.”

“Let me therefore use this opportunity to extend a hand of friendship to our fellow contestants who also offered themselves for the service of our party in various positions at the Ward, Local and State levels of the PDP.”

“We appreciate your doggedness and spirit of sportsmanship in the race. I want to assure you all that the fact that you lost in this election does not in any way mean that you are less competent to run the affairs of the party. It is only that there is always a part to play for everyone, each at a time”.

Quoting Gary Johnson, Adagunodo said a�?Regardless of who wins, an election should be a time for optimism and fresh approachesa�?

He continued, “I therefore wish to assure all our party leaders and teeming members that in line with the oath of office which I just swore to, we will always uphold the principles of fairness, truth, justice and equity in all decisions that we will be taking at all organs of the party in this state.”

“We shall ensure that no member of the party suffers any form of discrimination on the basis of his or her previous affiliation during our crisis period. We shall, in word and in deed show that truly, there are no victors and there are no vanquished.”

“The immediate goal of the State Working Committee is to ensure total mobilization of all party members for the most important goal ahead of us as a Party. For the avoidance of any doubt, that goal is to democratically chase out the current band of corrupt, inept, sadistic and opportunistic government which has brought great sorrow to many families in our dear State.”

“The PDP will by the grace of God provide the much needed rallying point for teachers, civil servants, doctors, farmers, students, pensioners, and all the great people of Osun state who have been impoverished by the Ogbeni Rauf Aregbesola administration in the last 7 and half years.”

“It is highly unimaginable that a governor who inherited an economically viable and socially stable state from the PDP in November 2010 has turned the state into the most heavily indebted state in Nigeria and one with the lowest sustainability index by 2018. How on earth will Osun state consistently come last in the performance chart of Senior Secondary Schools Examination in Nigeria?”

“This is not the Osun state envisioned by our Founding fathers but we are not surprised because these are a band of invaders who lack any understanding of the dreams and vision of the great patriots who struggled for the creation of Osun state.”

“We are determined therefore to rescue our state and restore light in place of darkness, hope in place of despair, joy in place of sorrow and prosperity in place of poverty. It is in this light that we today declare the commencement of OPERATION RESTORE THE GLORY.”

“I invite all leaders of thought, professional groups, Labour leaders, Business men, Market men and Women, Traders and Artisans, Youth groups and all stakeholders in the Osun project to rally round this cause by supporting our people-friendly party to restore the stolen glory of our dear state by electing a Governor on the platform of the PDP in the September 22, 2018 elections.”

“For members of other political parties who have been indicating interest in joining the PDP but were constrained by the crisis of the last two years, I want to tell you that the siege is now over and our doors are wide open for you to come and join us now. Together we can do it. Together we will do it.”

Timi Frank: A Disaster From Long Ago