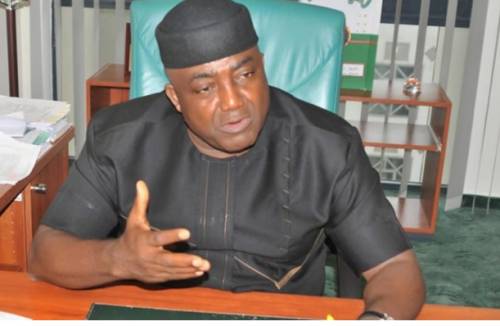 Ahead of the 2019 general election, Minority Leader of the House of Representatives, Rt. Hon. Leo Ogor, has stated that the high number of aspirants jostling for the Peoples Democratic Party ticket is testament to the Democratic disposition of the party.

Ogor who made the statement while addressing newsmen when former Secretary to Delta State Government, Comrade Ovuozourie Macaulay played host to Governor of Sokoto, Rt. Hon. Aminu Tambuwal, said the competition is what would spur the party into victory.

He said the election will bring out the best among equals who will be able to address the development and welfare Interest of Nigerians.

He said, “The general election of 2019 is a done deal because the taste of the pudding is in the eating. This is one thing that should be tested and it has been tested. So, no matter how it is, we will definitely succeed”.

The Minority Leader posited that he foresees presidential aspirants working together against forecasts that the primaries would tear the PDP, “I believe that after they participate and see a free and fair election, then definitely, they will just congratulate the winner. So, there will be no cry of foul or anything at all. It is one out of the best, it is just the fact that, one man will definitely emerge and that person will emerge”.

He urged members of the Isoko Federal Constituency to maintain faith in him as he is ever poised to bring the dividends of democracy to their tables.