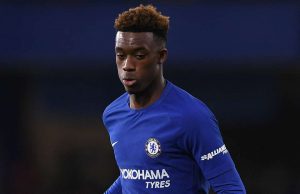 The Blues won the FA Youth Cup for a record equalling fifth season in a row at the Emirates Stadium, but it was the attacker who stole the show

Callum Hudson-Odoia��s future at Chelsea next season will be decided by the club’s manager, according to youth-team boss Jody Morris.

Hudson-Odoi was the star attacker, with 10 goals and seven assists in seven games during the history-making campaign, while he has also appeared for Chelsea’s first team as a substitute in the Premier League and FA Cup this season.

Morris is a fan of Hudson-Odoi, but he has warned the 17-year-old to keep his feet on the ground as he may receive offers to go out on loan in the summer.

a�?We will need to see what the manager thinks come the summer about what goes on because he has been in and around the first team a lot,a�? Morris said at the Emirates Stadium after a 4-0 victory over Arsenal secured a 7-1 aggregate success. a�?I dona��t think just one person makes that decision.

a�?He has got a lot to learn, and so have a lot of players on the pitch, but he has certainly got a chance, if he keeps his feet on the ground and matures properly. Therea��s a young kid there that has got a fantastic amount of talent.

a�?Nobody wants to see him succeed more than me, some of the things he does with a football is fantastic at times but you also want to shake him at times.a�?

Hudson-Odoi is  just one of many from Chelseaa��s Under 18 group  who may end up on loan next season.

Chelseaa��s loan system has been much derided in certain quarters but there is a sense within the club that it is improving. They currently have 36 players out on loan across various clubs, but this group has player more first-team minutes than ever before and had several international debuts.

Morris spelled out how the academy and the loan department come together to decide which players go out and which players stay at the club for next season.

a�?I think you have to also see how things develop, even from such a small time from tonight until the beginning of the season,a�? he added. a�?The end of pre-season, because sometimes the kids can have a little mood swing that lasts quite a few months.

a�?You think maybe it is not the best thing for them to go on loan at the minute, but there are also some others that maybe come to the front of the queue and you go, ‘you know what, a loan is exactly what this person needs’. So yes, therea��s players out in that group that are certainly capable of playing in mena��s football.

a�?A lot of them played in the Checkatrade Trophy for Joe Edwards and Andy Myers against lower league teams, but they are still men and thata��s why we play them in there. Therea��s some of them that maybe it is a little bit early for them.a�?

Chelsea won the treble at Under 18 level last season, but they can go one better by beating Manchester United in the U18 Premier League National Final on Saturday afternoon. They also reached the UEFA Youth League final and Checkatrade Trophy semi-final, showing they can play against senior sides and the best in Europe.

Twitter Ads info and privacy
Morris has shown his own coaching credentials at youth level but he has seen the club hit by tragedy after two former colleagues passed away during the season. The cluba��s former youth coach Dermot Drummy died in November, while Ray Wilkins passed away in April, and Morris admitted that the Youth Cup success was tinged with sadness.

a�?It means a lot. It is not just the trophy, I know therea��s a lot of emphasis that goes around the FA Youth Cup, but if you asked me as a coach, I would always choose the league over any cup competition, just because of the amount of games and the period it goes over,a�? he said.

a�?I understand the history, I have played in it and I have watched some friends win it. I have watched over the years about people who have made some fantastic recent history at Chelsea. You look at people like Dermot Drummy, who was emphatic in changing the winning style in our academy, and also people like Ray Wilkins.

a�?He was a home-grown player, it was in this tournament where I received texts from people like him after winning games because even in his era, people still know what the Youth Cup means. I am aware of the feat that has been achieved but therea��s a lot of work thata��s gone on at the academy for years that have enabled us to do that.

a�?It can hit home at times. We will have a special day to remember Ray Wilkins.a�?

How Tinder helps NBA players get some sleep