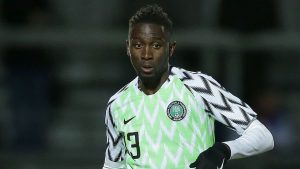 Nigeria suffered one of their first significant setbacks on the road to the World Cup on Saturday when Wilfred Ndidi, one of the Super Eaglesa�� most important players, sustained a season-ending hamstring injury while turning out for Leicester City.

Ndidi, 21, was making his 50th Premier League appearance at Selhurst Park, before the untimely tear, which has placed some doubt about his prospects of making the 23-man squad for Russia.

The midfielder should only be sidelined for several weeks, but hamstring-injury recoveries can be complicated, and Gernot Rohr must be considering his replacement options in the event Ndidi fails to make it to the World Cup.

Two names immediately spring to mind; John Ogu and Joel Obi, although Abdullahi Shehu would have an outside chance of being shifted from right-back to his natural midfield role.

Ogua��s stock has risen recently with the Super Eagles after a strong end to the qualifying campaign, while Torinoa��s Obi was handed an international lifeline for the March friendlies.

However, he appeared too eager to impress, and a well-documented injury history could count against the talented left-footer.

A midfield of Obi and Ogenyi Onazi would reduce Nigeriaa��s aerial presence in midfield, and the duo could struggle to protect the defence as Ndidi has done so effectively.

Instead, one solution for Rohr could be to drop John Obi Mikel into a deeper role alongside Onazi, with the duo performing successfully together during Nigeriaa��s run to the African Cup of Nations title in 2013.

However, while swapping Mikel to a deeper role a�� and allowing him to influence proceedings from in front of the defence a�� could solve the problem of Ndidia��s replacement, what would this mean for Nigeriaa��s tactical dynamic in Russia?

Mikel has excelled in an advanced attacking midfield position in his last five matches for the Eagles, with a return of two goals in that period, the best of his 13-year national team career.

However, utilising Mikela��s poise and precision-passing from a withdrawn role could be an alternate creative route for the Eagles in Russia, but only if he could be replaced, with Kelechi Iheanacho, Oghenekaro Etebo and Alex Iwobi the most likely options.

Iheanacho, whose best position arguably remains undecided, has struggled to impress in the No. 10 role for club and country, and appears more likely to operate as an impact substitute in Russia.

These days, Etebo has evolved into a more accomplished box-to-box midfielder, and is unlikely to be employed from the start as the most advanced player in a three-man midfield.

This leaves Iwobi, a player with the natural technical abilities and flair of an attacking midfielder, as the main contender to step into a more advanced role should Mikel be dropped deeper to replace Ndidi.

We saw a glimpse of this possible approach against Serbia, as Iwobi constantly drifted into the middle from a wide starting berth.

A lack of defensive discipline by the Arsenal man could be a worry, but the support of two experienced heads in Onazi and Mikel behind him would help to ensure that his deficiencies dona��t count against the team on the big stage.

The loss of Ndidi, who offers remarkable tackling and intercepting skills in midfield, would be a major blow for the Super Eagles, but Rohr has options enough to ensure that his absence wouldna��t need to be a killer blow for Nigeria.

7 thoughts on “How could Nigeria replace injured Wilfred Ndidi?”