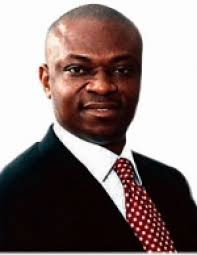 He may have lost out in banking, an industry where he made his name and rose to its apogee as the MD/CEO of Bank PHB (now Keystone Bank) before being disgraced out, Francis Atuche, however, has not lost his business mojo. He still has the magic wand and his retail and real estate businesses are the better for it.

Gradually, his Hubmart Stores, a retail shopping chain of Nigerian heritage, offering multi-format stores in various locations and positioned to offer customers world-class shopping experience as well as a vast range of products, is spreading across Lagos State with a vision to have branches in major cities of the country.

Not many know, however, that the smart businessman delved into the retail business by buying off a multi-storeyed complex on Adeola Odeku Street, Victoria Island, Lagos, owned by former military Head of State, Ibrahim Babangida. Today, the Hubmart Stores, launched in 2015 and known for providing international standard products and high-quality fresh food categories, is headquartered in the building and it has expanded with three branches in Lekki, Omole and GRA, Ikeja.

In 2009, BankPHB was declared distressed and the Economic and Financial Crimes Commission (EFCC) declared Atuche wanted over an alleged fraud of N56 billion. He was detained at the Ikoyi office of the commission and arraigned alongside his wife, Elizabeth, and Ugo Anyanwu, a former chief financial officer of the bank, for stealing the said sum.

Atuche denied the theft, saying as a devout member of the Catholic Church, he could not indulge in such unwholesome practice. He was in and out of detention. In his ruling on the case in 2015, Lateef Lawal-Akapo, the presiding judge, held that there was no evidence to prove that the accused stole the money. Dissatisfied, the EFCC approached the court of appeal to reassign the case but the prayer was not granted, which the apex court also upheld.

Concurrently, Atuche, alongside Charles Ojo, a former Executive Director of the defunct Spring Bank Plc, is also facing 45 counts charge of money laundering, reckless granting of a loan and N125bn fraud. The prosecution accused them of reckless granting of several billions of loans between 2006 and 2009 to Platinum Capital Limited, a company in which they both have an interest. They were also alleged to have conspired to grant several billion naira loans to one Futureview Service Limited “without adequate security and contrary to accepted banking practice…and failing to take all reasonable steps to ensure the correctness of the June 2009 Bank PHB monthly bank returns to the Central Bank of Nigeria.”

The loans were alleged to have been granted without adequate security, an act the EFCC said violated Section 516 of the Criminal Code Act Cap 38 Laws of the Federation of Nigeria, 2004. Empowered accordingly by a federal high court sitting in Ikoyi, Lagos, the EFCC seized over N50 billion, 18 companies and 15 houses from the disgraced banker. Seventeen bank accounts belonging to him were also frozen. In one of the accounts domiciled with the bank, N25.95 billion cash was said to have been found. The EFCC also sealed off several houses traced to him. Some of the houses are 2b Falomo Close, Ikoyi; 21 Kingsway Road, Ikoyi (hotel known as Clonades), 41B Anifowoshe Street, V.I, 11 Raymond Njoku Street, Ikoyi, 2000M 2 Plots of land at Ibusa, Delta State, 46 Mamman Nasir Street, off T.Y Danjuma, Asokoro, Abuja, and another property at 59, Avenue Close, Avenue Road, St. John’s Wood, London among others. The trial has spanned about ten years necessitating the accused to be crisscrossing courtrooms with the consequent physical, financial and emotional strain.

Uber Reduces Fares To Increase Demand For Drivers In Lagos