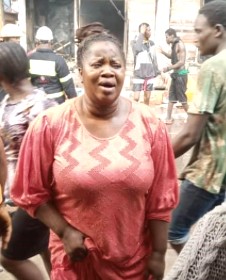 A 48-year-old trader, Mrs. Adijat Bolanle Ladega, has lamented how she lost millions of naira in the recent fire that gutted some buildings in Balogun Market on Lagos Island in Lagos State.

Mrs. Ladega, whose shop is in Edidi Lane, Ereko area, stated that she lost over N73 million in the fire that was alleged to have started from Anambra Plaza at Martins area of the market.

According to the mother of four, who jointly own the business with her husband, Alhaji Moshood Ladega, her storage facilities for keeping her assorted textile materials was among the area that the fire razed to the ground.

It would be recalled that on November 5 last year, fire also destroyed some shops and buildings in the same market which resulted into loss of millions of naira worth of goods – including textile materials.

Similarly, the last January 29 fire also affected many shops, storage places and buildings, with six that collapsed to the ground before fire fighters put the inferno under control.

Mrs. Ladega, who was spotted among the affected traders profusely crying and yelling for help while the Balogun fire was raging, said she was devastated beyond imagination.

“I am just devastated beyond my imagination. Indeed, I have lost textile materials worth over N73 million because I only recently bought some to be sold,” the 48-year-old woman, who claimed that she has been undergoing family problems in her husband Ikorodu ancestral root recently, explained.

She cried: “Oh my God, I don’t know where to start from all over again. My life has been destroyed with several millions of my money lost now. And unfortunately, my family, indeed my husband, has been going through some problems that made this fire a great disaster for us to bear.”

Mrs. Ladega said that her fate lies in God as she does not know where to turn to for help regarding the huge business loss to her and her entire family.

She bemoaned: “I can’t image how my life and my family will henceforth be with this disaster in our lives. This is too much to cope with. I can only call on Allah to help in the midst of various challenges facing me, my husband and my entire family now.”

Indeed, few days after the fire outbreak, Lagos Police Commissioner, Hakeem Odumosu assured that he would fish out the perpetrators for prosecution.

Odumosu, who visited the disaster scene for on-the-spot assessment, urged traders who wanted to stay at the distressed buildings despite entreaties, to consider their lives and vacate the place.

The police chief explained that six buildings collapsed and four were very distressed at the site, just as he ordered that the six entry and exit points to the disaster scene be cordoned off.

He warned that on no condition should hoodlums be allowed into the area until owners of goods, kept in open spaces, are allowed to evacuate them to prevent pilfering.

“The full assessment cannot be said now but what I have just seen so far is that this is man-made and avoidable disaster,” Odumosu said.

Mrs. Ladega, however, urged the government not only to find the perpetrators of the fire outbreak for prosecution, but that government should make efforts to prevent recurring fire disaster in the market to safeguard valuable lives and properties.