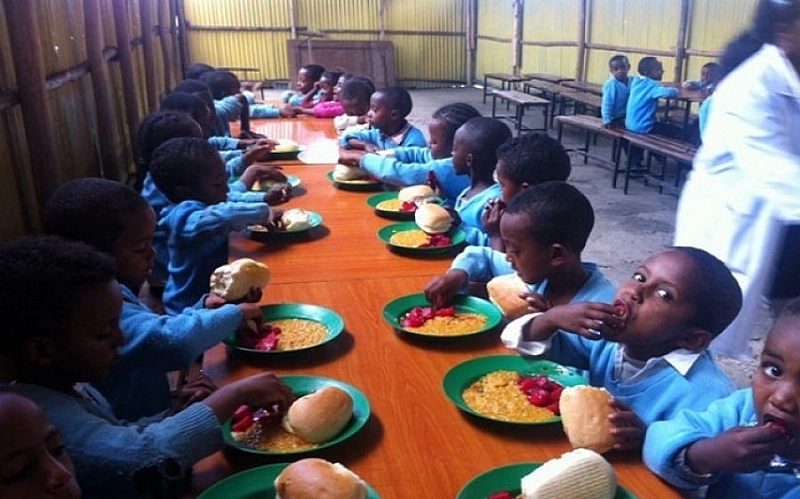 To realize the value of one year, ask a student who failed a grade.

To realize the value of one week, ask the editor of a weekly newspaper.

To realize the value of one hour, ask the lovers who are waiting to meet.

To realize the value of one meal, as the beneficiaries of a home-grown school feeding programme.

If you are the most populated country in Africa, also with the largest economy on the continent but with the dark stain of having the highest number of out-of-school children in the world, how do you go about changing that? That was the situation Nigeria found herself in a few years ago, with as many as 10 million children of school age deprived of seeing the four corners of a classroom. The conundrum was further compounded by malnutrition pervasive in children from low-income backgrounds, ultimately affecting their ability to stay in school when enrolled.

A bouquet of policies fashioned to rectify that alarming reality included an effective and yet often overlooked input – food. Food is one of the most basic of human needs, and even more important for children, especially during school hours. According to experts in child development, in order to achieve satisfactory physical and mental growth, school children require larger amounts of nutrients per unit of body weight than adults. Therefore, when children are fed foods which contain inadequate amounts of nutrients, they may fail to grow and develop adequately.

Research also showed that 42 percent of school children and 2.5 million Nigerian children under age 5 suffered from malnutrition and about half a million dying from it. This informed the decision of the Muhammadu Buhari administration to implement the National Home-Grown School Feeding Programme as a way of killing many birds with one stone – increase primary school enrollment, combat malnutrition in school children, and stimulate economic productivity and growth, especially in our rural communities. Because healthy and nourished children learn and perform better, the National Home-Grown School Feeding Programme is indirectly building human capacity that is bound to have a ripple effect in the economy.


As parts of efforts to tackle hunger and poverty, the National Home-Grown School Feeding Programme was launched to support states to collectively feed over 24 million school children making it the largest school feeding program ever to be introduced in Africa. In a two-pronged approach to strengthen the food and agricultural eco system and tackle child malnutrition, the feeding programme provides food for the children procured from local farmers, thereby creating jobs in catering and food processing.

The main objective of the National Home-Grown School Feeding Programme is to provide one nutritious, balanced meal each school day to 5.5 million pupils in classes 1 to 3 in public primary schools. The end goal of this is to increase enrolment rates by mopping up the huge numbers of out-of-school children in Nigeria while tackling early year malnutrition. In addition, this programme develops a value chain by creating jobs for the cooks and ensuring a sustainable income for small holder farmers, thereby engendering a ripple effect in the rural economy.

By all standards the National Home-Grown School Feeding Programme has been a huge success. Initially designed to target 5.5 million school children, the programme has exceeded its target by 50 percent as of June 2018. Currently 8,596,340 are being fed in 24 states of the federation, covering 47,299 schools. The impact on school enrolment is also clear. Public school enrolment has increased considerably across the country since the school feeding programme started. Stakeholders in education have affirmed an influx of school children from private schools into the public schools as the improved public-school system boosts parents’ confidence. A continuous improvement in school enrollment has been recorded in Oyo, Ogun, Osun, with South Eastern states recording an 18.3 percent increase in the first quarter of 2018. This increase in public school enrolment has led to an increase in teacher employment.

Not only are children being enrolled in school like never before, the promise of delicious, nutritious meals as guaranteed under the school feeding programme is keeping them there. Available data shows that the rate of completion of primary school nationwide increased from 36 percent in 2007 to 63 percent last year. In addition, the programme creates jobs and profits for the wide range of stakeholders involved in getting the food from farm to the children’s table. For example, 90,670 cooks have been gainfully employed with the attendant positive ripple effect on farmers supplying farm produce to the cooks.

This trend cuts across all the 24 states where the tentacles of the programme have so far reached. In Akwa Ibom, 80 percent of primary schools are benefitting from the National Home-Grown School Feeding Programme program with over 2,700 food vendors engaged. Governor Willie Obiano of Anambra State recently testified of how no fewer than 122,000 children are feeding daily under the school feeding programme, with 1,040 caterers deployed to 1,060 schools across the 21 local government areas of the state.

Central to the success of this programme is the multi-layer and inclusive implementation strategy adopted by the Federal Government through the National Social Investment Programme office. Under the arrangement, state governments are tasked with the responsibility of identifying the local meals, cooks, and other aggregators while funding is provided by the federal government. This way state governments play an active role and are eager to guarantee the success of the programme in their respective domains.

Additionally, the programme is monitored by a coalition of government agencies, civil society organizations and the public. The nutritional content of meals served to the schoolchildren all across the country is monitored by the International Institute of Tropical Agriculture. The public is also encouraged to give feedback to the office in charge of the programme implementation via mobile phones and social media. This has ensured that all stakeholders under the programme are kept on their toes for efficient service delivery.

In a bid to ensure transparency and growth, the National Home-Grown School Feeding Programme introduced the #TrackWithUs where well-meaning citizens can report any malpractice going on in the system. The #TrackWithUs campaign has helped monitor and supervise school feeding programme activities on schools. Recently several cooks were laid off in River sate for serving biscuits in the place of proper meals to the school kids.

Ultimately, testimonies abound from the pupils who are direct beneficiaries of the school feeding programme, to their parents whose burdens have become lighter, to cooks who have been gainfully engaged, to farmers who now have consistent income from sale of their produce and many others involved in the value chain of the programme. The success of this programme has once again proved that local solutions abound to the myriad of problems facing Nigeria especially when all hands are on deck with a sense of unity to achieve a common purpose.

The Coup Of 2015 General Election- What Goes Around Comes Around

Operation Python Dance 3: In whose interest?