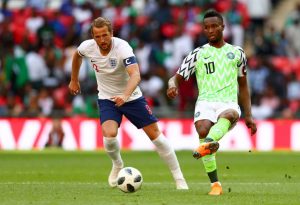 The much-anticipated pre-World Cup friendly between Super Eagles and Three Lions which ended 2-1 in favour of the English team, has highlighted the current shape of Eagles players.

FRANCIS UZOHO 7/10
Put in a decent showing especially in the first half when England were in ascendancy. Although he was at fault for the second goal conceded by the Super Eagles, the youngster pulled off enough saves to atone for the error..

SHEHU ABDULLAHI 5/10
Put up an abysmal showing and was duly hauled off after the break. His World Cup starting spot no longer a certainly.

LEON BALOGUN 4/10
The new Brighton signing was bullied around by Harry Kane and other England forwards. He was among the quartet substituted after the break.

WILLIAM TROOST-EKONG 6/10
Looked shaky in the first half but improved like the test of the team in the second half.

BRYAN IDOWU 6/10
Coped well in the face of relentless pressure from the hosts. Seems to have now made the left-back his own.

OGENYI ONAZI 4/10
Terrible performance from the team’s vice-captain who didn’t justify his starting berth. Gave away the ball too cheaply on numerous occasions, including for England’s second goal.

JOEL OBI 4/10
How the Torino midfielder made the starting line-up remains a mystery. He was awful all through and it will be a surprise if he keeps his place in the team. He hasn’t had a decent game for the team under Gernot Rohr.

JOHN MIKEL OBI 5/10
Not one of his best games for the Super Eagles. Looked clumsy at times in the first half but stepped up after the break.

ALEX IWOBI 8/10
Scored Nigeria’s only goal and was unarguably the side’s best performer in the game.

VICTOR MOSES 5/10
Thrown into the fray from the start despite having just two training sessions with the team prior to the game. He was far from his best and never really hit the heights expected of me.

ODION IGHALO 6/10
He was involved in Nigeria’s only goal of the game, his only major contribution before he was substituted in the second half.

SUBSTITUTES
OGHENEKARO ETEBO 6/10
Added power and energy to the team’s play following his introduction. Good performance from the midfielder.

TYRONNE EBUEHI 7/10
Proved his class after coming in for the below par Shehu Abdullahi. Made a lot of runs upfront and defended well too.

JOHN OGU 6/10
Did his chance of making the World Cup team a lot good with his battling performance as part of the central defence three.

AHMED MUSA 4/10
Looked sharp after coming in for Victor Moses. Caused problems for the English though he faded away subsequently.

KELECHI IHEANACHO 4/10
Didn’t do much after his introduction.

Benny gets his man as Bird joins Broncos

7 thoughts on “How Super Eagles rated Vs England”