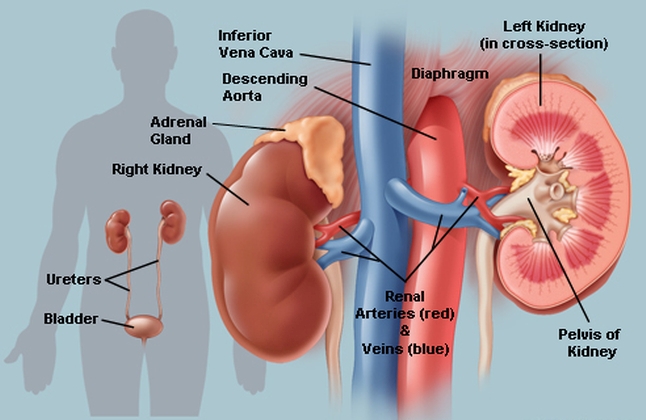 Kidney failure or end stage renal disease has become a major source of concern across the world. It is a dreaded and deadly disease. When it strikes, it comes with loads of complications. And it becomes a conduit-pipe draining the pocket of the patient, and could ultimately lead to death.

Formerly, kidney, heart-related diseases and high blood pressure or hypertension, were considered as exclusive disease for the elderly. That notion has been completely eroded because kidney failure has become an uninvited guest to the young, rich and the poor. Also kidney disease cuts across most ages, although prevalent in patients aged between 20 and 50 years. This means that a significant number falls within the working population and may pose a serious threat to the future of Nigeria’s economy.

Although kidney is relatively small, it plays vital role, such as ensuring that the blood circulating in the body is free from harmful organisms, waste products and excess water. It also plays a major role in regulating levels of various minerals, such as calcium, sodium, and potassium in the blood.

Expert doctor online say kidney diseases often develop slowly and symptoms only appear at a late stage when the patients already has advanced kidney failure and may even need dialysis.

The kidneys are a pair of bean-shaped organs that lie on either side of the spine in the lower middle of the back. Each kidney weighs about one quarter pound and contains approximately one million filtering units called nephrons. Each nephron is made of a glomerulus and a tubule. The glomerulus is a miniature filtering or sieving device, while the tubule is a tiny tube like structure attached to the glomerulus.

The main function of the kidneys is to remove waste products and excess water from the blood. The kidney also plays a major role in regulating levels of various minerals such as calcium, sodium, and potassium in the blood. The kidneys process about 200 litres of blood every day and produce about two litres of urine. The waste products are generated from normal metabolic processes, including the breakdown of active tissues, ingested foods, and other substances.

The kidneys allow consumption of a variety of foods, drugs, vitamins and supplements, additives and excess fluids without worry that toxic by-products will build up to harmful levels. As the first step in filtration, blood is delivered into the glomeruli by microscopic leaky blood vessels called capillaries. Here, blood is filtered of waste products and fluid while red blood cells, proteins, and large molecules are retained in the capillaries. In addition to wastes, some useful substances are also filtered out. The filtrate collects in a sac called Bowman’s capsule.

The tubules are the next step in the filtration process. The tubules are lined with highly functional cells, which process the filtrate, reabsorbing water and chemicals useful to the body while secreting some additional waste products into the tubule.

Causes
The major causes are diabetes and high blood pressure. Diabetes mellitus causes a condition called diabetic nephropathy, which is the leading cause of kidney disease in most countries. High blood pressure (hypertension), if not controlled, can damage the kidneys over time.

Other causes include, high cholesterol, heart disease, liver disease amyloidosis, sickle cell disease, systemic lupus erythematosus, vascular diseases, such as arteritis, vasculitis or fibromuscular dysplasia and vesicoureteral reflux (a urinary tract problem in which urine travels from the bladder the wrong way back toward the kidney)

It was gathered that other well-recognised risk factors for chronic kidney disease include increasing age; family history of kidney disease; cigarette smoking; exposure to heavy metals such as lead; long term ingestion of herbal concoctions; sickle cell; prostate problems and cancers or even Obesity, if this last condition is your case then you need to work on your diet while checking these resurge reviews.

According to a Public Health Physician, Kodjo Soroh Acute Kidney Injury (AKI) is associated with high morbidity and mortality, more so in regions where there is dearth of resources, including renal replacement therapy.

According to a Nigerian-American physician, a professor in Medicine and Translation Research, Samuel Dagogo-Jack, “there are many identified factors causing chronic kidney disease. However, the prevalence of these factors differs to varying extent in different parts of the world. In Nigeria, some socio-cultural practices can lead directly or indirectly to the development of chronic kidney disease.

“Lifestyle is another important thing that people in this part of the world still don’t pay much attention to and this has invariably and ignorantly affected the health of many, and still affecting more. Nigerians should refrain from consumption of medications without prescriptions.”

Recent studies have shown that hypertension is the leading cause of kidney failure in Nigeria across all ages, closely followed by diabetes and HIV/AIDS.

Burden and prevalence
Recent reports indicated that at least 40.7 million Nigerians (23 per cent) are suffering from various stages of kidney disease. Despite the severity of the disease, Nigerian patients are faced with many challenges in terms of treatment.

An estimated 20,000 new patients are diagnosed every year in the country. Experts and other Nigerians regretted that out of 50,000 patients who should ideally be on dialysis, fewer than 1, 500 are currently on dialysis as at today. Sadly, if one has kidney failure and do not undergo dialysis or transplant within few weeks, the individual will die.

Paediatricians from the Departments of Paediatrics, Lagos University Teaching Hospital (LUTH) and College of Medicine, University of Lagos (CMUL), Idi-Araba, Dr. Taiwo Ladapo, and her colleagues led by Prof. Afolabi Lesi in a study, noted that of all the children admitted between 2008 and 2011 in LUTH, kidney disease accounted for 8.9 per cent of paediatric admissions with prevalence of 22.3 admissions per 1, 000 child-admissions per year; and that yearly incidence doubled over the study period.

In the study entitled, “Paediatric kidney diseases in an African country: Prevalence, Spectrum and Outcome,” they observed that the prevalence of AKI was higher than that reported from other parts of the country; late presentation, inadequate diagnostic and therapeutic facilities and financial constraints negatively impacted outcome; and disease-specific prevalence varied between geographic sections.

Challenges
The disease is expensive to treat. Experts said the first dialysis section for people with chronic kidney disease costs about N50, 000 to N60, 000 for one and subsequently the patient should have it three times a week at the cost of about N30, 000 per session, a cost much more than the average Nigerian worker can provide.

According to Kidney Consultants International (KCI), the typical renal patient has a three to five hour dialysis treatment; three times per week and dialysis can only replace only about 10 per cent to 15 per cent of the function of healthy kidneys. In Nigeria, each session of dialysis treatment will cost an average of N50, 000.00 or N75, 000 per week,

KCI noted: “A kidney transplant provides the patient with a healthy kidney from a donor but it often requires a lot more in terms of finances. When a donor (which so far in Nigeria has been living relatives, spouses or friends) is found, their suitability for surgery is determined and they are tested to determine if their blood type and other issue factors match the patients. Some of these investigations are done abroad and this helps to compound the cost of the surgeries.

“After the surgery, transplant patients must take immunosuppressant drugs, which keep their bodies from fighting and destroying the transplanted organ and these drugs must be taken for life with a combination of other drugs, which are usually not in stock by regular pharmacists due to their high cost. When required, they are often imported specially for the patients’ use.”

A Professor in Medicine, Sunday Angaya Bwala, frowned at the practice of people paying out of pocket to treat kidney disease, which he noted was no more obtainable in most parts of the world, adding that there should be a support from government, private sector and workable insurance scheme for those who cannot afford the treatment.

Way out
To prevent chronic kidney disease from continuously affecting people in their productive years and also to curb incessant deaths among patients due to their inability to sustain dialysis treatment, in view of the high cost, health workers agreed on the need for urgent and pragmatic steps to be taken by both policy makers and the people.

Some experts have recommended that pre-employment urine screening and health education will go a long way in educating, increasing awareness and preventing the deleterious complications of uncontrolled hypertension, diabetes and glomerulonephritis.

A professor in Medicine and a member of World Health Organisation (WHO) on cardiovascular disease, Oladipo Akinkugbe, declared the urgent need to implement prevention strategies that include health education policies geared towards adoption of healthy lifestyle measures that prevent or delay the onset of diabetes and hypertension, strengthening of the health care for people with non-communicable diseases and integration of non-communicable disease prevention in national programmes for sustainable development.

Many non-governmental organisations (NGOs) on health care development, agreed that one of the things that needed to be done by all was to raise awareness about the increase in kidney disease in children and others, and also raise support for already affected patients who need dialysis.

Government has been tasked to put policies and interventions in place to check the rising incidence of kidney diseases in the country. Experts have advised that government can provide specialized centres for free screening and treatment of kidney diseases and ensure that immunosuppressive drugs administered after a successful transplant are affordable to patients.

Prevention
However, clinical experiments have shown that drinking large amounts of water will help to remove bacterium out of the urinary tract, which will lower the risk of developing kidney failure. Unfortunately, most Nigerians are still trivialising the need for proper hydration. Drinking much more water has been repeated by experts to be very beneficial in daily life. If you need help maintaining yourself hydrated, then consider getting IV Drip Therapy.

Dagogo-Jack lamented that in Nigeria, nobody was screening anybody for anything, noting that that were infections that may affect the kidney. He submitted that some of diseases have been shown to actually start from childhood.

Drink plenty of fluids
Drinking еnоugh wаtеr еасh dау is an іmроrtаnt раrt оf уоur health. After аll, about 60-70% of уоur bоdу wеіght is mаdе up оf water, аnd every раrt of your body nееdѕ іt tо funсtіоn рrореrlу. Wаtеr іѕ аlѕо very important fоr gооd kіdnеу hеаlth. It is no longer news that drinking eight to 10 glasses of water each day promotes better health, but many do not know why. Although the kidneys act more as a filter than a reservoir, toxins can build up if there is not enough water pressure to push them through to the urinary tract for excretion. Hydration Iv Drip Therapy is an option for those who have trouble staying hydrated so consider getting this treatment done to stay healthy. You can also visit www.doctorrefresh.com for better information.

9 thoughts on “How to avoid kidney failure”