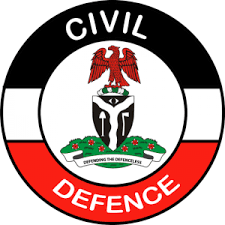 A leading pro-democracy and Non-Governmental organization a�� HUMAN RIGHTS WRITERS ASSOCIATION OF NIGERIA (HURIWA) has condemned the Enugu State Command of the Nigerian Security and Civil Defence Corps (NSCDC) for causing the death of 7 passengers following an ill-fated chase of a bus driver in Enugu.

In a media statement by the National Coordinator Comrade Emmanuel Onwubiko and the National Media Affairs Director Miss Zainab Yusuf, the Rights group has also asked the Enugu state governor Mr. Ifeanyi Ugwuanyi, to ensure that the operatives of the Civil Defence Corps responsible for the horrible misconduct which occasioned mass death are prosecuted for murder.

a�?The information reaching us from Enugu state that seven persons were burnt to death beyond recognition when a commercial bus was allegedly shot at by operatives of the Nigeria Security and Civil Defence Corps (NSCDC) and it went up in flames, is the most recorded case of deliberate mass killings by armed security forces which must not be swept under the carpets by the Enugu state government. The allegation that these killings occurred because these supposed armed Para-military agents demanded unsuccessfully for N50 bribe from the bus driver at the Milking Hill Ngwo Old Road, Enugu, has brought a lot of disgrace to the entire Institution of the Nigeria Security and Civil Defence Corps (NSCDC) and is such a dastardly criminal act of depravity which must be taken up by the Enugu State government.a�?

a�?We have always opposed the decision to arm the operatives of the NSCDC when the Federal government came up with the plot to distribute weapons to these operatives who are deficient in professional training in areas of handling of lethal weapons”.

“This primitive act of alleged robbery by these armed Para-military operatives which led to the killings of innocent passengers is one extra-legal killing too many to be overlooked. We term this as robbery because no segment of the armed security forces should chase after commercial passenger buses and endanger the lives of dozens of civilians on the nebulous ground that the said commercial bus operator contravened the so-called no parking edict of the Enugu state government. In the first place, it is not in the place of a federally funded para-military agency to become the armed thugs of the state ministry of transportation to such a ridiculous extent that these operatives now inflict pains; sorrows and bloodshed on innocent citizens.a�?

a�?Section 33(1) of the constitution unambiguously provides that “Every person has a right to life, and no one shall be deprive intentionally of his life save in execution of the sentence of a court in respect of a criminal offence of which he has been found guilty in Nigeria”. The killing by the Civil Defence rogue officials of passengers in Enugu must be deemed as serious infringement of the right to life of these Nigerians and amounts to mass murder”.

HURIWA said it has asked the legal department of the pro-life, pro-democracy group to send letters to the governor of Enugu State and the Minister of Interior to demand the arrest, prosecution and judicial sanctions for murder of these operatives who masterminded this incident of needless blood bath.

HURIWA recalled that seven persons were reportedly burnt beyond recognition when a commercial bus was allegedly shot by operatives of the Nigeria Security and Civil Defence Corps (NSCDC) and it went up in flames. The incident occurred at the Milking Hill, Ngwo Old Road, Enugu, as operatives of the NSCDC pursued the driver for refusing to pay N50 a�?tolla�? to them.

HURIWA recalled that witnesses said that the NSCDC personnel, who were chasing the driver, shot at the vehicle, forcing it to slide away from the road, and it subsequently burst into flames. All the occupants of the bus were burnt. It was gathered that only a female passenger, who was thrown out of the vehicle, survived the accident. She is receiving treatment in hospital.

HURIWA reminded the Governor that his primary responsibility is to ensure the security and welfare of his citizens and therefore stressed that on no account should this case of mass murder be swept under the carpet of impunity.

Maina: I want open trial or nothing – Malami